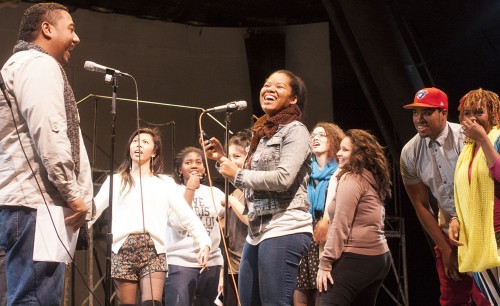 Performers come onto the stage to encourage Christopher Pulu, a junior speech communications major and Sasha Jones, a junior political science major, who each read their poetry in a competition called “Beats vs. Lyrics” Nov. 30, in Dailey Theatre. Spoken Wordplay hosted an open mic tribute to hip-hop that included groups from the University of La Verne and the Corner Poets from Cal State San Bernardino. / photo by Ryan Gann

Student performers bared their hearts to an audience of more than 50 students at the “Tribute to Hip-Hop” open mic event in Dailey Theatre on Nov. 29.

There were 15 performers who shared their spoken word poetry. Two also sang a cappella.

Woods is the president of Spoken Wordplay, a poetry club at the University of La Verne, who organized the event and also performed.

Brandon Christopher Allen performed a poem called “There is No Applause,” and said the piece was about his generation.

“Just save your applause until we make it because I know that we’ll make it,” Allen said.

Allen is a member of the Corner Poets club from Cal State San Bernardino.

Before she began, she warned the audience that she was sick, though her voice did not sound affected at all in her performance.

The song, which was first a hit in the 1960s, has been covered my a number of artists, including Roberta Flack and Amy Winehouse.

Johnson said she incorporated both of those versions into her performance.

In her poem she asked why Christmas is pronounced without the “t.” If it really was about Jesus, it should be pronounced “Christ-mas.”

“Who said anything about a holiday, no this is a holla if you got a dolla day,” Jones said.

John St. Clair, another member of the Corner Poets, performed a poem titled “Meeting at 7” about getting intimate with a woman.

“I need you, I cling to you like newborns do. I’m in need of your touch,” St. Clair said.

A third member of the Corner Poets, Ahmael-Balraj McGee, performed a poem titled “Breakup Poem Part Three.” He listed all the things that he did not like about a woman named Lisa.

Woods performed a poem about being shy around someone special.

“Maybe then I can talk to you as easily as I do in my mind,” Woods said.

Lasia Lynnai, the only woman in the Corner Poets, performed a poem about metaphorically planting a flower when she began a relationship with a man and how she always stood beside him.

“When it finally bloomed beautifully, you picked it and gave the flower to her,” Lynnai said.

Her performance caused a big reaction from the women in the audience.

The audience expressed their sympathy for the poem titled “The Friend Zone” that Christopher Pulu, junior speech communications major, read while the instrumental for the song “Just a Friend” by Biz Markie was playing in the background.

“I sit there and I listen with open ears letting you pour out your feelings while I sit by just to count your tears,” Pulu said.

“After every repetitive situation I would think that our relationship would sail through the seas making you see me, your friend zone.”

After the individual performances, all the participants were brought back on stage for a poetry rap battle. While billed as “Beats vs. Lyrics,” it turned into a battle of women versus men.

The beats supply the mood but lyrics created the experience.

“I’ve seen previous performances that they’ve had, that’s why I was very interested to come,” Criminology major Natzhely Chavez said.

“I just love the way that they express themselves through their words,” Covarrubias said.

Friendship is magic
Leopards lose close one to CMS, 73-67