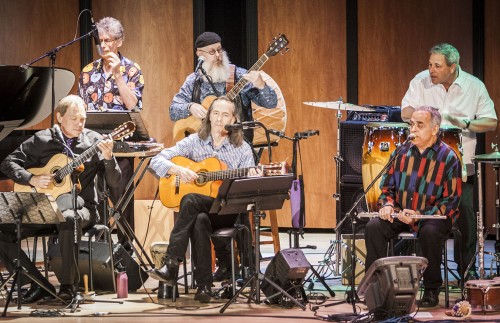 The pouring rain did not shy away the crowd of adults and students from listening to the smooth sounds from “A Night in Rio,” a concert presented by Michael Ryan and Friends in Morgan Auditorium.

“There are always big crowds when you play with Michael,” band member and bassist Garret Wolfe said.

Michael Ryan, adjunct professor of music and guitarist, said the idea to create concert based solely on Brazilian music came along when he traveled to Rio de Janeiro.

“I fell in love with the music,” Ryan said. “It was smooth.”

Michael Ryan and Friends is a band name he takes along with him in which he performs with different bandmates based on the concert.

For this performance, he included his friends that had skills in playing 14 Brazilian inspired songs.

Ryan had second thoughts of this performance since playing this type of music was not his specialty.

“I had to practice a lot,” Ryan said.

The concert opened up by a slow samba sung by Ryan and vocalist Catherine Lombardo called “Your Song is in the Wind,” which brought in a blend of sounds from all the instruments played.

The concert continued with a somber piece written by the band called “Brazilian Rain.”

The maracas used for this song added a sound similar to the rain, allowing one to visualize the rain.

Audience members sat stiffly in their seats with their eyes glued to Wolfe as he began to beat box in the next song, “One Note Samba.”

The crowd loved it as they gave a long applause after he ended beat boxing.

“There is no real name for it,” Wolfe said. “We are referring to it as mouth percussions.”

The night did not end there as two female Brazilian dancers came to the stage to dance, which enhanced the show.

Audience members were intrigued during the performance as they watched the dancers quickly move their bodies in sync to the powerful rhythmic Brazilian sounds.

The beads on their skirts added to the sounds and blended with the instruments played.

Ryan likes to bring in dancers in every concert he plans.

Ryan played his guitar as he performed a song titled, “Bachianas Brasileiras No. 5,” while vocalist Emily Lopez sang, bringing her crisp opera vocals to the stage.

“I enjoyed the opera singer and the uniqueness and quality of the song,” senior liberal studies major Janessa Aguilar said.

Their connection with each other as they sang this mellow tempo song made the performance entertaining to watch.

As the lights turned on and began to fill the auditorium after the last song “Samba De Orpheu,” Brazilian dancers came out one last time getting the audience members to dance along with in what became a conga line.

Michael Ryan and Friends will present “Spirit of Ireland” as their next concert in January.