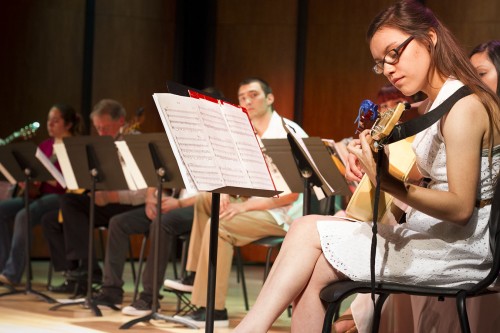 Showcasing their work and dedication this semester, the members of the guitar ensemble class held their end of the semester performance Tuesday in Morgan Auditorium.

Led by Adjunct Professor of Music Michael Ryan, who has more than 50 years of guitar playing experience, 13 performers took the stage in front of a large audience.

The group played a variety of pieces from various composers such as Bach, Mozart and Handel.

They also performed songs in several other guitar styles such as traditional flamenco and modern.

The concert started off with a piece called “Sakura” that was played by the entire ensemble group.

“My favorite part of the show was getting to perform one of my own pieces and looking out to see familiar faces in the audience,” said Reyes.

“Overall I was really happy with the performance,” he said.

The ensemble consisted of students with varying levels of experience from beginners to advanced.

The group practiced for this event all semester.

“I thought it went good, they pulled it together,” said Ryan. “A lot of these pieces are very challenging, it was really tough music.”

Lizette Flores, a sophomore liberal studies major, enjoyed her first time being in the concert.

“This year was my first year in guitar ensemble but from hearing other older members, this year we had a lot more people come,” said Flores.

“Everyone brought in something different and when it was all combined it was amazing. I had a lot of fun and I’m looking forward to doing this next year,” said Flores.

Students, faculty and members of the community who attended were engaged during the entire show and the show ended with an enthusiastic standing ovation.

“I thought the concert was really great, I enjoyed hearing renditions of songs that I know,” said freshman psychology major Crystal Parga. “I would recommend other students to go to the next guitar ensemble concert.”

First-person experience: Taking a walk on the wild side
Classrooms planned to ease crunch