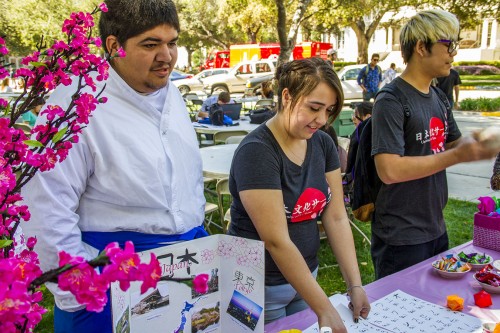 The Japanese Culture Club hosted its first Cherry Blossom Festival at Sneaky Park to celebrate the coming of spring and bring Japanese tradition to the University of La Verne Tuesday.

At the event, there was a variety of Japanese food, activities and tables run by members of the Japanese club.

The Cherry Blossom Festival had many different things for students to do.

Club members had poster boards that had information about Japanese culture and the history of the festival.

“Our inspiration is that it is so important in Japan and it takes place around the same time as the two year earthquake that happened March 11, 2011, in Fukushima, Japan,” Navarro, sophomore business major, said.

The JCC usually does a lot of activities inside its club but this is one of the first that involves the whole La Verne community’s participation.

Erika Lozano, co-founder and former president of the JCC, said she is happy about the Cherry Blossom Festival and how the club has taken off since it started two years ago.

“Basically it was a bunch of students wanting to share our passion for something we loved,” Lozano, senior international business major and Japanese minor, said. “We are getting people aware.”

During the festival there was Japanese music playing while students enjoyed a nice meal with information games and competitions.

“The food was pretty good and I liked the games but my favorite part had to be the cherry blossom origami,” said Johanna Jimenez, freshman psychology major.

“I didn’t think diversity was a big part of the school until now.”

Some of the members in the JCC were even dressed in traditional Japanese clothing while others had shirts from just the club.

Navarro said the JCC plans to make the cherry blossom festival an annual celebration for the University and its students as a way to welcome spring.

“We can’t go to the festival so bringing it here is the next best thing,” she said.