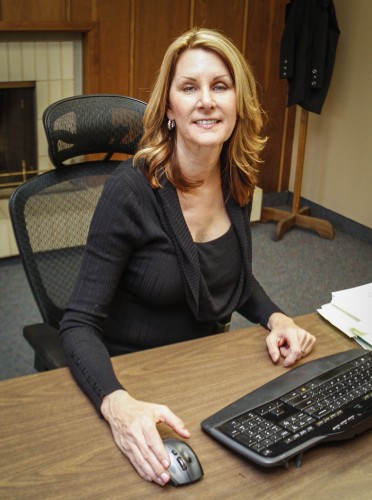 Selected from a field of 60 candidates, Teri Baker was chosen to undertake the position as assistant to the La Verne City Manager, Bob Russi, succeeding Jeannette Vagnozzi. Baker is an alumna of the University of Redlands and Cal State San Bernardino. Baker started her first day at the city of La Verne Nov. 16. She has worked for the cities of San Bernardino and Huntington Beach. / photo by Chelsey Morrison

La Verne City Manager Bob Russi has hired a new assistant to oversee the city clerk, risk management and the election process among many other things.

Baker was introduced at the city council meeting Nov. 16.

Baker brings experience, including being a city liaison for multi-jurisdictional and community committees, developing strategies to confront local homelessness and several city annexations to La Verne.

Before coming to La Verne, Baker worked in San Bernardino, where she started as an intern in 1995 and stayed there for 15 years, holding numerous positions such as director for the City of San Bernardino’s economic development agency.

In 2013 Baker moved to Huntington Beach and served as assistant to the city manager for two years.

Both San Bernardino and Huntington Beach have a population of about 200,000 people.

“I’m enjoying the position so far because I am able to be more involved in stuff because the city is small.”

She is also excited to participate in the state of the city address in January.

Baker had been keeping an eye out for positions close to her home in Highland and heard about the job opening because someone at her previous job told her about it.

She loved the closeness of the community, how beautiful it was and the pride of the people who lived in it.

“It is wonderful here, everyone is nice, and I felt at home even on my second day here,” Baker said.

In order to get the job, Baker was required to interview with a panel of current city employees before meeting with Russi.

“I had a lot of great candidates, but she came in already doing the level of work that she will be doing as my assistant,” Russi said.

Her first week in the office involved strategic planning, setting future goals and prioritizing the budgets for the upcoming years.

“I think she will be a great fit in the office,” Russi said.

Baker prepares the council agenda for the city developing meeting, which is when the mayor of the city highlights the events that happened throughout that year. She will also oversee the city’s communication and marketing efforts.

“I like that there is a lot of long-term employees,” Baker said. “I plan on staying in La Verne even until retirement.”