By Celeste Drake, Jesica Kimberlin on October 20, 2017 in News 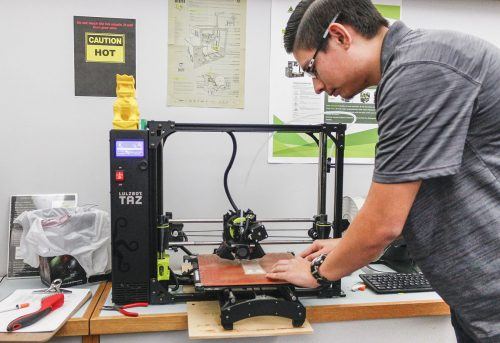 Freshman computer science major Alex Lara demonstrates how to use a 3D printer in the Makerspace of the Wilson Library Tuesday. The Lulzbot printer can make its own parts, making it almost completely self-sustaining. A product line of Aleph Objects Inc. the Lulzbot products are produced as open-licensed designs, enabling users to easily modify and replace parts. / photo by Celeste Drake

“There was a video on a kid receiving a prosthetic arm and it actually worked,” Lara said. “So that’s how I got into it.”

He explained that any 3D printed objects need a base, or supporting foundation.

On top of the base, layers will be built on top of each other. This process is called the additive process.

For the file to print, it has to be saved in a file extension called the Stereo Lithography file, or STL. Lara demonstrated how to find these printable files and how to use the 3D printer.

Cesar Trujillo, junior computer science major, said that the most interesting part of the presentation was that an organ can be printed with a 3D printer. While he works for Makerspace, he said he didn’t know that 3D printers can print organs.

“Just the fact that you can use different materials and people are using living tissues to print organs, it’s interesting,” Trujillo said.

Gabe Lopez, freshman computer science major and catcher of the University’s baseball team, said that he knew about 3D printing through working at the Makerspace, and he printed the EvoShield that he uses in games.

“I think it’s funny that they can build their own parts,” Lopez said. “That’s my favorite fact, it’s building itself and kind of like robots taking over the world.”

Chloe Frescas, freshman physics major, said she learned about the workshop from Lara.

Frescas said that she 3D printed a Hello Kitty figure and she wishes she had a 3D printer of her own at home.

Lara said that the Makerspace offers other services, such as laser cutting, circuit printing, 3D scanning, poster printing and more.

Students and faculty are welcome to visit and use the provided services as long as the policies are met and it is only for educational purposes.

Trujillo will host a laser cutting workshop from noon to 1 p.m. Tuesday in the Makerspace.