By Jacob Barriga on October 23, 2020 in Feature Slider, News 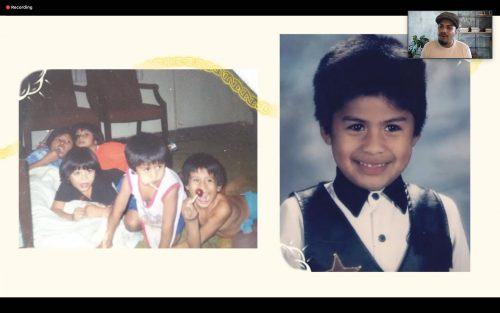 Yosimar Reyes, poet and public speaker, shows photos of himself and his family from when they were children during his lecture Oct. 15 via Zoom. His “Finding Undocujoy” project focused on his experiences as an immigrant from Mexico and the struggles that came with it. / screenshot by Jacob Barriga

Poet and public speaker Yosimar Reyes talked about the need to change the narrative on immigrants and how his own experience can be used as insight into the life and struggles of a modern, Latino immigrant Oct. 15 via Zoom.

Reyes is currently working on a one man show called “Prieto,” which reflects Reyes’s life as a young child sneaking into America with the help of a coyote, who smugglers that help immigrants get into the United States, and the struggle to survive once they are here.

“I want to show the people the true poverty and the real struggle these people go through, and it may shine a different light than the usual story we see today,” Reyes said.

Christian Bracho, co-director for the Center for Educational Equity and Intercultural Research, hosted the talk and wanted know how Reyes feels about how undocumented people are being portrayed in media, as portrayed in his project “Finding Undocujoy.”

“You are working on ‘Finding Undocujoy.’ What is the goal? Why do you think that some of the recent narratives and series about undocumented people have been focused on the joyful stories rather than the victim narratives?” Bracho asked.

Reyes explained how a lot of people want to show strength and they want to use joy to show resistance against the struggle, rather than showing deaths and violence.

“’Finding Undocujoy’ was a video campaign we launched with Define American, and we asked undocumented people what they do for themselves and makes them feel they are living. People are surfing, knitting and riding bikes and we are really out here,” Reyes said. “We don’t want to use their deep traumas or the vulnerability against them. I wanted to show that we care for each other and we wanted to show some love for each other.”

Reyes discussed the struggles of his parents’ generation, working and living in a country that does not understand them when they speak and does not listen to them talk.

“We would have to translate for our parents just to make sure they weren’t getting harassed,” Reyes said. “We just want a sense of belonging and a sense of a place to feel wanted and this country doesn’t always give us this.”

Reyes went back to visit Mexico about three years ago and he experienced culture shock by the experience.

“You’re in America and you’re like, ‘Yes, I’m Mexican, I’m not anything else.’ But I got to Mexico and it was hot, there was no wifi and I realized I was a spoiled pig and how Americanized I was,” Reyes said. “My ideology and concepts of justice changed, and I realized I shouldn’t judge people because this is the culture and I have grown up in a different culture.”

Misty Levingston, associate director of multicultural affairs and black student services, was excited and thankful for Reyes and his lecture.

“You are so dope. Thank you so much for coming out and talking to us about your experience,” Levingston said. “You talked about culture capital and a lot of people do not talk about that, can you elaborate on the importance of having it and discovering it?”

Reyes said he discovered himself in his undergraduate program in college and he realized his own story is something that people can relate to and can help people find themselves. As a writer, Reyes wants to bring people closer to themselves and let them know that they can do it. Reyes said he wants to change the narrative of his own people and the ones he identifies with most.

“I want to affirm people more and I want to provide a brighter outlook on my people that is my goal,” Reyes said.