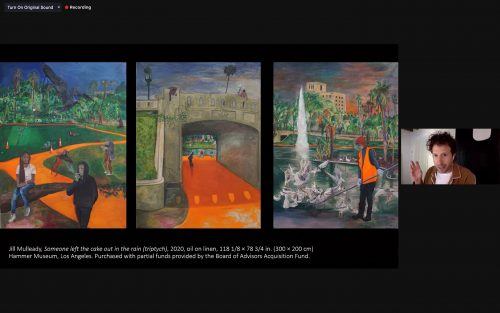 Aram Moshayedi, curator at the Hammer Museum in Los Angeles, leads a conversation about Jill Mulleady’s paintings as part of the museum’s short discussion series about artists, “Made in L.A. 2020,” on Feb. 3. Mulleady’s work included a triptych of her depiction of present-day MacArthur Park, titled “Someone Left the Cake Out in the Rain.” / screenshot by Christine Diaz

The Hammer Museum in Los Angeles and UCLA hosted their weekly lunchtime art talk, “Made in L.A. 2020,” to 74 participants via Zoom Feb. 3, featuring the work of painter Jill Mulleady.

The discussion, led by Hammer Museum curators Aram Moshayedi and Nicholas Barlow, focused on Mulleady’s piece “Someone Left the Cake out in the Rain.” The triptych painting portrays images of MacArthur Park, located in the Westlake neighborhood of Los Angeles.

Mulleady’s depiction of MacArthur Park in spring of 2020, pre-COVID-19, was a grim look into the reality of our society rather than a fantasy wrapped in the glamour one would imagine when they think of the Westlake area. The piece currently hangs in the Hammer and has been there all year with no audience to see it.

“The piece here at the Hammer is lonely and lonesome without the audience. All dressed up with nowhere to go,” Barlow said.

The imperfection of life that Mulleady highlights in her piece is the beauty of ugliness that Los Angeles holds in the heart of the city. In her piece there is a smoker fulfilling his vice, two dogs engaged in a fight, a ghost paralyzed and stuck for eternity, and tipped over trash can with litter thrown onto a loosely put together soccer field in the distance. There is a sanitation worker stuck in a never-ending cycle of life within a swarm of seagulls feeding off of the waste run off from the city.

Mulleady’s painting itself has imperfections that reflect the vision she expresses in the piece.

“There are areas that are hurried and unfinished that reveal a lurking substrate and spectral as the old ghost nearby,” Moshayedi said. “Sketchy visual disruption as this one resembles a murky soup and contrast with the neighboring areas of finer detail.”

Mulleady is attempting to poke holes in the fantasy of the affluent Los Angeles area through her reality and what she sees in her daily life, he said.

“The Westlake neighborhood is now better known as a common place for discarded bodies and firearms in the ‘70s and ‘80s. Which tells a truer story of the city’s economic disparity of its immigrant population,” Moshayedi said.

Mulleady’s depiction of MacArthur Park feels grim, as reality is much more real in Los Angeles than the glamour that the city supposedly holds.

“Mulleady evokes precedents that once dealt with economic disparity and inner psychological struggle of contemporary life through a decidedly exaggerated and often dream-like lens,” Moshayedi said.

Laurie Trainor, retired docent at Los Angeles County Museum of Art, believes that Mulleady is trying to represent the city of Los Angeles through this iconic landmark in the city.

The Hammer hosts these art discussions weekly on Wednesdays at 12:30 p.m. over Zoom. For more information, visit hammer.ucla.edu.