By Jacob Barriga, Nathan Hua on November 1, 2019 in Sports, Volleyball 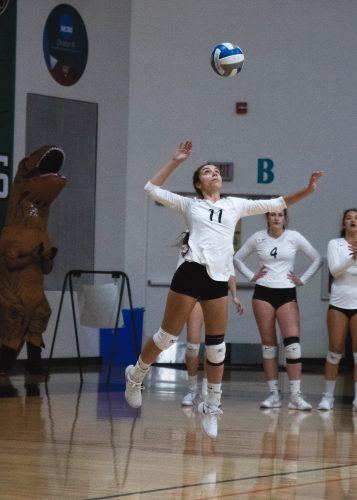 Leopards freshman defensive specialist Noelle Blumel serves the ball to the Tigers in La Verne’s matchup Tuesday against Occidental. The Leopards picked apart the Tigers in a sweep. / photo by Nathan Hua

On Tuesday, the women’s volleyball team took an impressive win over the Occidental Tigers, 3-0.

Coming off of a weekend that included a 3-1 win over Caltech and a 3-2 loss to Pomona-Pitzer, the Leopards looked to start the final week of Southern California Intercollegiate Athletic Conference play off right.

The first set began with the Leopards taking an early 10-7 lead over Occidental.

The two teams would trade points until late in the first set when the Leopards’ offensive attack became too much for the Tigers.

In the second set Occidental jumped out to an early advantage over the Leopards, 10-6.

The Leopards clawed their way back and drew even at 10 after four straight points that followed four long, demoralizing rallies for the Tigers.

The two teams then battled back and forth for the next six points tying it up at 16 late in the set.

Freshman outside hitter Ayana Mier was not having it, as she would have four straight kills to put the Leopards up for good.

The Leopards put away the Tigers in the second set 25-16.

In the third and final set of the match, the Leopards did not wait to put the Tigers down.

The Leopards jumped out to a 5-0 lead early and never looked back as the Leopards’ high-powered offense was too much for the Tigers.

The Tigers would only come within seven points of the Leopards before they were defeated in a third straight set, losing the final set 25-13.

The Leopards dominated the final frame with 14 kills and no errors.

Mier lead all players in the game with 12 kills, adapting well to her new position.

“At first I was really nervous about playing a new position, but as soon as I got in a groove, I got comfortable and I just tried to play my best,” Mier said.

Senior outside hitter Darrah Jones was happy with the win and was impressed by her teammate’s performance.

“We changed some things up tonight, we were missing some people tonight and Ayana stepped up to the challenged and she crushed it. I think we were well prepared for the game,” Jones said.

With their win, the Leopards improve to 8-6 in the Southern California Intercollegiate Athletic Conference and have put themselves in great position to get themselves into the SCIAC tournament next week as the final week of conference play comes to an end this weekend.

Currently in fourth place in the conference standings, the Leopards now need one win to secure their spot in the tournament. Junior libero Emma Estigoy knows they have to be ready to play.

“We have to be confident, even when we are running different line-ups, we have to be able to adapt and be ready for our next challenge” said Estigoy.

With the tournament on the horizon, head coach Jeff Hendershot, is excited about where his team is right now.

“I love it, we have been working all year long for this situation to have the opportunity and were ready to take it,” Hendershot said.

The Leopards, needing just one more win to secure their spot in the tournament, will finish the regular season at Redlands at 7 p.m. Friday then at home against Claremont-Mudd-Scripps at 4 p.m. Saturday.