By Jacob Barriga, Veronyca Norcia on September 27, 2019 in LV Life 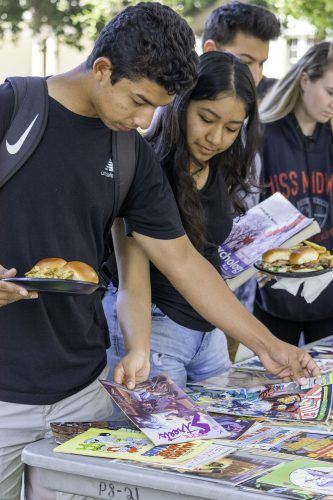 About 100 people attended the event.

The Campus Activities Board gave each student who participated the opportunity to browse a selection of hundreds of comic books ranging from anime, DC, Marvel and more.

“I would never miss an opportunity to dress up as a super hero,” said Deja Goode, junior journalism major and CAB event coordinator. She said she has always been a comic book fan.

Each student got to take two comic books for themselves.

There was also a photo booth for students who wanted to take their picture with Thor, Wonder Woman, Iron Man and Superman, and create their own comic strip.

There was also a raffle where participants could enter to win a full set of the Avengers movie franchise.

“We are trying to see what everyone likes and we hope to put on more event like this to get a wider portion of the student body involved,” Taylor Vasquez, sophomore educational studies major and CAB Spirit Chair.

“I was just walking by and I thought it was cool seeing all the comics out,” said Joseph Meyer, freshman biology major. “I am a huge Marvel fan, I was Spider Man for Halloween eight years in a row growing up.”

“Events like this brings people with similar interest together, and I am able to talk to people I may not normally get the opportunity to talk to,” Ortiz said.