By Priscilla Applebee, Veronyca Norcia on October 25, 2019 in LV Life 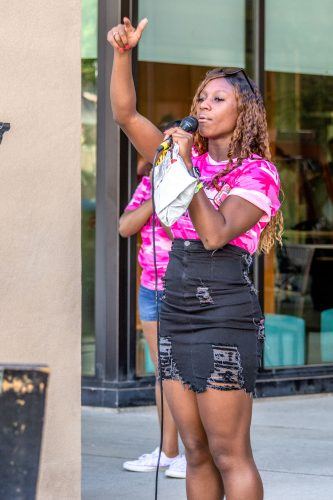 To honor Breast Cancer Awareness Month, the Black Student Union took over the Citrus Courtyard Wednesday to support a cause that has affected many, including some of their members.

“This event means a lot to me, I have had family that overcame it,” said Deamil Aguilar, sophomore business administration major and vice president of BSU. “So when discussing a topic in this event, it allows us to have a sense of community.”

According to the National Cancer Institute, black women and white women are more likely to get breast cancer than any other groups, breast cancer is the second leading cause of cancer death after lung cancer.

While there are over 3.5 million breast cancer survivors living in the United States and survival rates after five years of being diagnosed is at 90%, there will always be new cases of breast cancer in women, according to American Cancer Society.

“I did this in honor of my aunt Wanda. She passed away from breast cancer, so this month is important for me and my family, so we really wanted to celebrate community over cancer,” said DeJohn Duplessis, sophomore sociology major and president of BSU.

“My stepmom has been battling breast cancer for the last four years,” said Mariah Williams, senior child psychology and child development major and social justice and events e-board member of BSU, “I remember when she lost all of her hair and only felt comfortable going out in public with a hat or beanie because people would stare, not that they were judging but because she had cancer.”

Donations of scarves, hats, and beanies to help those who are battling various types of cancer will be given to the cancer care center.

“We hope that anyone that has anything gentle used can donate to our box,” said Stacie Stills, junior kinesiology and head of event promotions for BSU. “So that when we give it back to them it will be full but Pomona Valley Hospital has a donation box that lasts all year long.”

Duplessis said she hopes that students learn the meaning of being a survivor.

“We hope that students pay attention to what it means to be a survivor especially during this month,” Duplessis said. “But we also want students to see that when we come together on campus as a community, nothing but good things happen.”

BSU will still be accepting donations at their next event which will be held Thursday at 10 p.m at the Hanawalt House.