By Isela Peña, Kevin Engle, Lehi Dowell, Tyson Dusch on May 19, 2000 in Greek Life, Letters to the Editor, Opinions 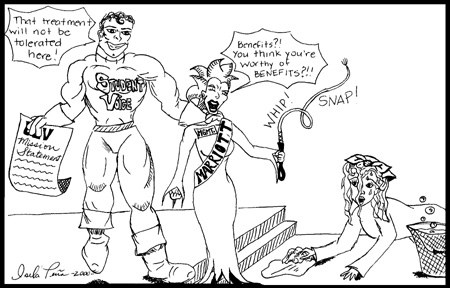 The concerned students organizing on behalf of Marriott employees are doing just the sort of thing those with a conscience ought to. The plight of the University’s contracted Marriott employees needs to be examined immediately, and the students are entirely right to bring their concerns directly to the University administration. It is unacceptable for any employee at ULV (outsourced or internal) to be subject to verbal and psychological abuse, given unrealistic workloads, or feel afraid to voice his opinion for fear of losing his job. Marriott workers deserve to have their needs met and their concerns addressed, and the University administration has an obligation to ensure they are treated fairly.

This is a clear case in which the University has an unprecedented opportunity to live up to its institutional values. According to the mission statement, the University affirms a philosophy of life that actively supports the health of the planet and its people, while encouraging students to become reflective about personal and societal values in light of that affirmation. The group of students speaking out for the Marriott employees already have embodied the mission statement in that regard. I hope the University will be as active in their response as the students were in theirs. The Campus Times has reported that the administration promised to look into the situation and address the concerns of the workers. I urge them to make good on their promise in a thorough and timely manner, as those workers deserve nothing less.

This letter is in response to “College memories through yearbook may be thing of past,” in the May 5 issue of the Campus Times. I was very discouraged as were many seniors who are graduating this year, to find out that we will not be receiving a 2000 yearbook.

ULV needs to wake up and smell the coffee. I challenge everyone to read the letter from the Layout/Artistic Editor located in the back of the Lambda 1999 edition yearbook. It starts out, “I am only a freshman, yet I was put in charge, with only minimal help to produce over 100 pages in four weeks.”

Obviously our little yearbook problem didn’t happen overnight. It is something that has been going on for quite some time. I understand many of the mishaps that went on last year, especially with Carol Fetty getting sick. I believe that struck all of us where it counts. However, there is absolutely no excuse for this year.

I do not blame the students who were trying to work on the yearbook, because they are not to blame. The blame lies in the apathetic support from the faculty, and advisers. Is there class credit offered for the yearbook staff? No. Does yearbook staff receive any kind of stipend or compensation? Technically yes, but logistically no. Come on people, they do these things in high school.

In closing, I just want to mention that I loved the title of the article printed two weeks ago. It actually made it sound as if the yearbook staff planned on doing the video all year long. Even if that is the case (which it isn’t), I am sitting here thinking how long are VCRs going to be around. Where did Beta, Atari, Commodore and Eight Tracks go? They are long gone, my friend.

I would like to thank Christine Owen for writing “Week unites fraternities, sororities” [May 12]. The article was well written, concise and very informative. I can honestly say that this year’s Greek Week was one of the best that I have seen during my time here at ULV.

Although I would love to accept total credit for putting on Greek Week, it is something that I cannot do. There were four key players from the other organizations that helped to make all the events possible. They were: Deja Collier, Iota Delta; Kelly Young, Sigma Kappa; Tara Ervin, Phi Sigma Sigma; and Danny Craig, Phi Delta Theta. There were also numerous faculty members that added their presence to the various events. They were: Michael Houdyshell, Grace Ramirez, Eric Bishop, Lisa Meyer, Shane Rodrigues, John Lentz, Julie Hurst, Jana [Ducret] from Maintenance, Brett [Roth] and Mary [Anderson] from Davenport and countless others.

True, I chaired Greek Week, and took on the responsibility of making sure everything was organized and ran efficiently, but what is a chair without support? Thanks to all those who helped during Greek Week!

I just got done reading your Greek Week article in the Campus Times [“Week unites fraternities, sororities,” May 12]. Thanks for showing that fraternity/sorority environment on campus is more than drinking and partying and that it really is a positive influence on campus life. I was a member of SAE back in the ’80s (yes, I’m an old man). Since graduation I now live in Elizabethtown, Pa., far from the ULV campus. Because of fraternity involvement and the bonds that you make, I have had numerous fraternity brothers visit me in Pennsylvania. This year alone I have had visits with six brothers. Next week I’m coming out to ULV and meeting with many more. It’s been 13 years since I’ve seen some of them, but we still stay in contact. I’ve really had limited contact with many friends who were not part of the fraternity and it’s because the Greek system keeps people together.

Anyway, I wanted to thank you for your article. I’ve read negative articles in the past and I think that some of them have been very unfair and it’s nice to see such a neat week get positive press in the CT. It sounds like fun. I wish I could be there.