By Campus Times Editorial Board, Isela Peña on May 11, 2001 in Editorials, Opinions 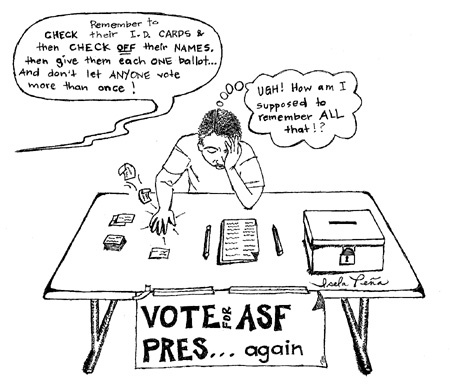 Considering that the University of La Verne is an institution of higher learning and has its own functioning student government, there should be no question in regard to it running a proper student election.

Yet, every year, when the Associated Students Federation (ASF) Forum attempts to hold voting procedures for an election, something always goes wrong.

Students should not be asked to revote for a presidential election at ULV. The school is small enough to get it right the first time. By asking students to revote, ASF is basically telling the student population that its members are not treating election procedures meticulously. Such action also should create a skepticism on campus: Is ASF capable of holding an election correctly? If not, perhaps such matters are in the wrong hands.

After the controversy that the 2000 presidential election brought to America, it should be obvious to ASF members how elections need to be handled carefully. Otherwise, ULV voters will become a microcosm of the Americans who question whether George W. Bush belongs in the White House. They too, will wonder if their student president should hold his position.

In addition, ASF should be prepared to face the students who will stop voting entirely. With every called revote and botched election, ASF is virtually telling students that their time and vote does not matter because, if a mistake happens, they will ask students to vote again.

Perhaps a solution to the careless techniques ASF has consistently used in terms of student elections, would be to call another organization to supervise their members.

If that does not happen and another mistake is made in regard to elections, students should refuse to comply.

Crossing off students’ names and making sure the same students do not vote twice is something elementary students are capable of doing. ASF should realize that college elections are taken seriously by students and those who run, they should handle maintaining elections the same way.