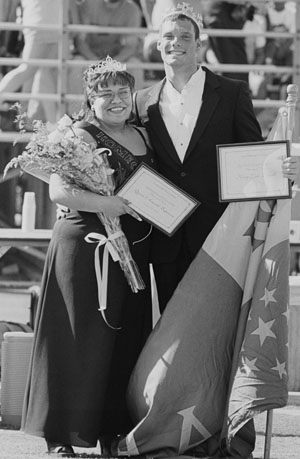 All eyes were on midfield at halftime during Saturday’s Homecoming game as journalism major Araceli Esparza and Spanish major Lehi Dowell were crowned queen and king of the 1999 Homecoming Court. Dowell was nominated for the court by the Sigma Alpha Epsilon fraternity. Esparza was nominated by the Campus Times. / photo by Isela Peña

Cheers rang out in Ortmayer Stadium on Saturday afternoon during halftime as seniors Araceli Esparza and Lehi Dowell were crowned the 1999 Homecoming Queen and King.

The announcement came after a hushed crowd awaited the conclusion of ULV’s annual Homecoming festivities, themed “Then and Now” this year.

Dowell, a Spanish major, has been involved in the Associated Students Federation (ASF) Forum, Sigma Alpha Epsilon Fraternity, Circle K International and Latino Student Forum during his time at the University. He was nominated by his fraternity and Circle K.

“It is a great honor to know that so many people support who I am and what I stand for,” said Dowell.

Esparza, a journalism major, is the current editor in chief of the Campus Times. She has been involved in La Verne Magazine and has served as an Orientation Week Leader (O.W.L.), L.E.A.D. (Leadership Education and Development) and Summer Service participant, and in Iota Delta Sorority for four years. She was nominated to the Court by the Campus Times.

“I don’t think it has hit me up to this point,” Esparza said. “But I think it is very flattering and the greatest compliment.”

As the names were called, Dowell was filled with anticipation, surprise and joy.

“It was an exhilarating moment when my name was called and I looked into the crowd and saw pure appreciation looking back,” he said.

Being crowned Queen filled Esparza with a sense of accomplishment and honor.

“I really hope I was elected because I could serve as a positive role model for the ULV community,” she said.

Eric Bishop, associate professor of journalism, served as master of ceremonies, while the 1998 Homecoming King Ordell Williams and Queen Amber Price were on hand to crown this year’s king and queen.