For the Associated Students Federation (ASF) Forum, the University of La Verne faculty, and the 200-300 students attending, the inaugural Winter Extravaganza at the Pomona Fairplex was the center of attention last Friday night.

After a crowded room was seated for traditional holiday dinner and a blessing was invoked by International Student Services Director Phil Hofer, attendees were greeted by ASF President Justin Jones-Rodriguez and Vice President of Student Activities Frank Tolentino.

Before having to depart for the evening, President Stephen Morgan also gave a holiday message wishing all a season’s best, and a strong conclusion to the first semester.

With nearly three and a half hours remaining in the evening, the event moved to the dance floor where students and faculty alike took part in the festivities.

One of the familiar ULV faces seen there was Director of Movement and Sports Science Rex Huigens with his wife, Karen.

“I think that any occasion where students can get together socially is a good thing,” Huigens said of the evening.

He also said he wished more faculty had been present at the event, noting that “the more faculty that show up, the more fun they would have all had.”

Huigens also expressed a contentment with the evening in comparison with the traditional Holiday Dinner from years past. Explaining that he felt certain aspects of the previous tradition were lacking, Huigens said. “Just because it’s a tradition, doesn’t mean it needs to continue. I actually think it was a pretty good idea.”

Sharing a likewise appreciation for the Winter Extravaganza’s festivities, were various students present.

“It was a great combination of good food, good fun and great people,” said sophomore Justin Poore. He felt the evening brought a sense of “elegance” that was not present at last year’s dinner.

“Seriously, it was one of the best times I’ve ever had at La Verne,” said junior Steve Myers.

With a favorable response from the students, Jones-Rodriguez was pleased with the event’s planning and results.

“I couldn’t be more pleased. Frank Tolentino did an excellent job,” said Jones-Rodriguez. 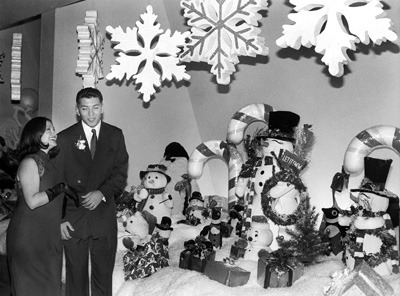 Shimmering Christmas lights, festive decorations and lightly sprinkled artificial snow greeted University of La Verne students and faculty as they entered the Flower and Garden Pavilion of the Fairplex in Pomona, where the first annual Winter Extravaganza was held last Friday. Junior art major Isabel Nguyen and her date, Citrus College student Mike Richardson, share a moment in front of a Christmas display during the dance. / photo by Isela Peña

He also felt the event was a continual improvement from last year and said “the tradition has definitely changed.”

Tolentino, who served as the event coordinator for the Winter Extravaganza, said the change in atmosphere for the ULV holiday celebration was a needed touch for students.

“It was actually a really good turn out for being off campus,” said Tolentino. He, like Jones-Rodriguez, said he sees a definite change in tradition for ULV.

Overseeing the event was Director of Student and Community Programs Michael Houdyshell.

The student director also said that, with the Winter Extravaganza taking the place of the traditional Holiday Dinner and the annual Spring Formal, it was a wise investment.

“ASF worked really hard and it was obvious,” Houdyshell said in admiration of the Forum’s efforts toward putting on an enjoyable event for the ULV community. “I hope people that were here will tell people who didn’t come how great it was,” he said.

Noting the strengths seen by faculty and students Houdyshell additionally envisions the possibility of the Winter Extravaganza becoming an annual University event.