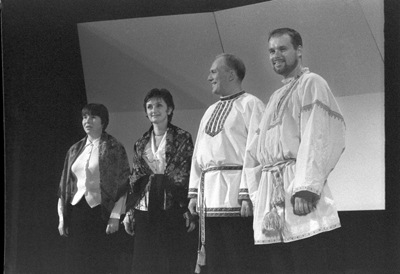 The Russicum ensemble is an a cappella group of four soloists, Kirill Sokolov, Aleksei Vorobiev, Mariana Tchikhatcheva and Irina Gringerg from St. Petersburg and Kiev. This group works to promote traditional and contemporary Russian religious songs, as a part of the cultural heritage of Europe. / photo by Christian Velazco

Russicum is a group of four professional singers from St. Petersburg who travel around the world singing and promoting Russian religious songs.

For many years their music was suppressed by the Russian government. Only within the last ten years has the group been able to share their choral tradition with the world.

Their program consisted of Russian Orthodox a cappella Church Music and a lively set of Russian folk songs.

The first part of the recital showcased their a cappella vocal skills and the second half provided an uplifting and lively performance of entertaining folk songs.

“My friend sitting next to me actually had to hold his sneeze because singing a cappella which is very difficult and they only have each other’s voices to keep their pitch,” said freshman music minor Stephanie Duarte said.

“We saw it as a unique opportunity to bring diversity to our campus and I think it really shows the breadth of what we do here,” Assistant Professor of Music Scott Farthing said.

The ensemble is in the United States for two months to raise money to continue to bring their cultural heritage to the international public.

“A vocal ensemble is like life. It is a give and take process. I think they illustrated that so well in their performance,” Farthing said.

Senior music major Derek Wendt also expressed his enthusiasm for the performance. “It was cool to see that even people on the other side of the world use the same singing techniques.”

Irina Grinberg, Russicum’s soprano, summed up the evening best: “Russians cannot sing their music without putting their soul into it.”