By Christian Velazco, Tim Tevault on September 13, 2002 in LV Life 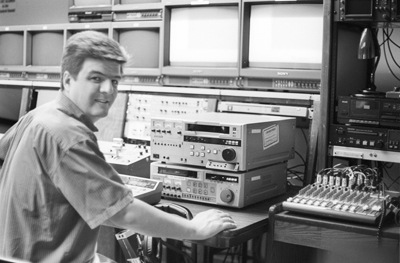 Invited to teach at the University of La Verne by the Communications Department, visiting Professor of Communications, Jose Soto began his first semester this fall. Soto is teaching a course in Mexican Cinema and computer software for film editing. Prior to coming to La Verne, Soto taught at Mayab University on the Yucatan. / photo by Christian Velazco

Life is coming full circle for Jose Soto, the communication department’s visiting professor. Coming to Los Angeles from Mexico has given him the opportunity to see the area his grandparents once lived.

“I’m coming back to my roots, ” he said. “It’s very interesting to go back to the place where your grandparents met and formed your family. ”

As a visiting professor of communications at ULV, Soto has got much more on his plate than just seeing the city where his grandparents lived.

The 34-year old, who teaches three courses this semester-television editing, Mexican cinema and media sales-comes from Monterey, a town in northern Mexico. He later moved to Mexico City, where he lived for more than 30 years.

Soto was raised by his parents with a younger brother and sister. He said his interest in communications-particularly in television-began with his involvement in a program at age 11.

“As kids (my brother, sister and I) were part of this group of actors that played at the government-owned television station, ” he said. “That was the first time that I was in contact with television. ”

“My mother, being very cautious, drew us away from that, but I never stopped wondering about (television),” he said.

As his education continued, Soto had the opportunity to be a foreign exchange student and attend high school his senior year in Seattle. There, he noticed that U.S. high school was a bit less rigid than Mexican high school, and he was able to take mainly electives because he was practically finished with his requirements.

Soto said that until about 1999, Mexico’s university system was very different than the U.S. system. Students attending a university in Mexico were not required to take general education courses before going on to courses in their major. He says the reason for this is because of how much more intense Mexican high school education is than in the United States; U.S. college students need reinforcement on basic subjects, such as math, history and English, even if the subjects are not a part of their majors.

After graduating from high school, Soto went on to Anahuac University, where he got his bachelor’s degree in 1991 in communications with an emphasis on television. Soto furthered his education by earning another degree in 1992 in symbiotics, the study of symbols. This is something he said he feels a genuine passion for and has always been interested in.

The same year he got his bachelor’s degree, Soto formed a production company based out of Mexico City, which eventually ended up collaborating with the American Film Institute on a few projects.

Soto also had the opportunity to work as an editor and production assistant on a television show called “La Hora Mercada,” a once popular show that was produced by Carmen Armendariz, whom Soto said is prominent in the industry. He also worked on “Tio Gamboin,” a popular children’s show, among others.

A few years down the road, Soto felt something was missing.

“My preparation was mostly on the production side and I always felt I needed some knowledge on the business side,” he said.

This need eventually lead Soto to seek his master’s degree in marketing and advertising in 1998 “to kind of balance things out.”

During the time he was working to get his master’s, Soto taught at his alma mater, and eventually became a media professor at Anahuac University. It was around that time he met Don Pollock, professor of communications at ULV, at a conference.

“We met at a conference a few years back and we’ve developed a friendship since then,” Soto said.

This friendship continued as Soto accepted a position as dean of the school of communications at Mayab University – Anahuac’s sister school – in Merida, Mexico, a town off the Yucatan Peninsula in 2000.

“(Pollock) has been kind enough to come down to the Mayab and Anahuac universities to lecture,” he said. Last year he invited Soto to teach here. This was an offer Soto could not refuse.

“I was interested in ULV and it presented a nice challenge for me to come up and teach in a language not my own, to a culture not my own and talk about several things that we thought important for both our universities, such as ethics in media, international standards for our students and the overall quality of television production,” Soto said.

“I no longer hold the position of dean because I’m here,” he said, adding that he has the option to return to Mayab or to go back to Mexico City, if he prefers, after his semester in Southern California.

Although he is scheduled to leave in December at the completion of the fall semester, Soto said he might like to stay.

“I would be open and interested in trying to stay for a longer period of time. It seems like one semester is not enough to have the whole experience,” he said.

George Keeler, chair of the Communications Department, believes Soto is doing a great job so far.

“He adds a new dimension to our department,” he said. “His classes are full, and he captures his students with what he tells them.”

Pollock, meanwhile, sees Soto’s master’s degree in marketing and advertising as a valuable asset because no one else in the department has that.

“He’s bringing a unique perspective that we don’t have here,” he said.

While in California, Soto said one of his main goals is to master U.S. production techniques.

“I really need more experience with the American production system,” he said, adding that he can try to gain an internship to help improve his own skills and get more experience.

Soto brought his family with him-his wife, Gaby, a 3-year-old daughter and 2-year-old son. They are living in Pomona, close to the University.

Of the classes he teaches, Soto’s favorite is Mexican cinema.

“I really like it because I have a chance to talk about my country in a different light (as opposed to) drugs, poverty, or earthquakes,” he said.

And overall, Soto said he is enjoying his stay at here.

“I was expecting a colder reception,” he said. “I’m amazed and happy that it wasn’t so. It has been nothing but warm reception and I look forward to the rest of the semester.”