By Chrissy Zehrbach, Christian Velazco on October 4, 2002 in Soccer, Sports 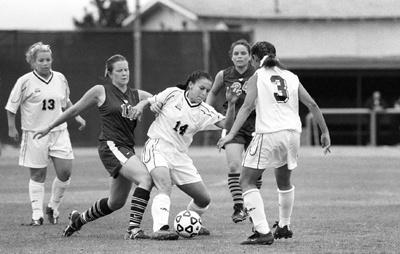 University of La Verne’s Libby Ramos (No. 14) tries to get the ball into scoring position as Pomona-Pitzer’s Katherine Moskop (No. 11) and Sarah Staller (No. 24) try to steal in Monday’s makeup game on Ben Hines Field. Assisting Ramos were Amanda Egan (No. 13) and Jacqueline Garcia (No. 3). The teams played to a draw at the end of the first half, but Pomona-Pitzer took the game in the second half, 1-0. The Leopards have an overall record of 4-5, and 1-3 for SCIAC. / photo by Christian Velazco

It was a busy week for the University of La Verne women’s soccer team who competed in three Southern California Intercollegiate Athletic Conference matches against Occidental College, Pomona-Pitzer and Whittier College.

The Leopards gained one win but suffered two losses, bringing their overall record to 4-5, 1-3 for SCIAC.

The Leopards were victorious Saturday shutting out the Occidental Tigers 1-0. They outshot their opponents 11-5. Senior forward Giselle Ortega took five shots on the goal and was the only player to score in the game, propelling the Leopards towards their win.

With three minutes remaining in the game, Occidental’s Jennifer Alonzo took a shot on the goal that would have tied the game, but the shot missed wide giving the Leopards their first SCIAC win of the season.

Monday’s make-up game against Pomona-Pitzer took an opposite turn. The Leopards were defeated 1-0 despite out shooting the Sagehens, 17-14.

Another loss followed Wednesday night as the Leopards fell to Whittier 2-1.

The Poets were the first to score, putting themselves on the board within the first five minutes of the game. The Leopards quickly responded with a rebound goal by senior forward Monica Martinez to tie the game. The Poets came back in the second half with another goal, despite being down one player due to a red card ejection.

“We played a lot harder against Whittier than Pomona-Pitzer, we just couldn’t find the back of the net,” Ramos said.

Next up for the Leopards is a game against Chapman University at 7:30 p.m. tonight in Orange. Conference play will then resume against Claremont-Mudd-Scripps at 7 p.m. Wednesday in Claremont.