By Alejandra Molina, Christian Velazco on October 25, 2002 in News 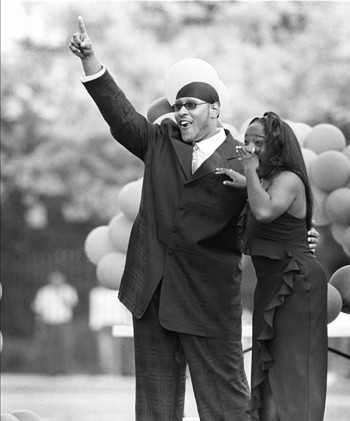 The pair was crowned by last year’s royalty, Anthony Granillo and Trisha Garcia.

Though the audience was cheering for the king and queen, the typically joyous event was dampened following quarterback Rollie Dykstra’s head injury, sustained in the annual Homecoming football game in the second quarter, and causing the game’s cancellation.

Emceeing the event was Shane Rodrigues, radio and television assistant.

Leading up to Saturday’s coronation and game was the annual Monte Carlo night.

Beginning at 10 p.m. on Oct. 17, University of La Verne students showed up in the Old Gym to gamble the night away.

Black jack, roulette and craps were among the games offered to students.

“It’s fun. You get to hang out with your friends and do the Vegas thing without losing your money,” said Sarita Vaughn, junior.

As students entered the gym, they were given $2,000 in fake money. Students bought their chips with that money to play.

First year students were enthusiastic towards the event and were surprised that ULV held this event.

“It’s cool, I didn’t expect ULV to do this kind of event,” said freshman Betty Mendoza.

This year, the money allotted to students was tallied at the end to see how much they gained. An auction was held at the end and students with the most money got first pick in prizes including DVD players. “I think it was really good. Every year there is a good amount of students who attend,” said sophomore Brian Ortega.

ASF senator Wendy Schwartz was pleased with the outcome of the event. “It’s going pretty well, it looks like people are having fun,” she said. “It looks great, we all worked really hard on this.”