By Jennifer Contreras, Jennifer Dodd on September 13, 2002 in LV Life 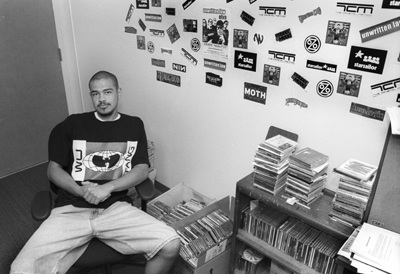 Senior Matt Perez spends the majority of his time at school in the music research office in the Arts and Communications Building. This year Perez, a radio broadcast major, has accepted the year-long role of program director for KULV. Part of his position involves working the music directors and going through the hundreds of CD’s that are sent to the station every year. This semester marks his fifth on the air. / photo by Jennifer Contreras

Perez, 21, who has attended ULV since his freshman year, is reticent when given praise for being chosen for the position.

“Mike (Laponis) and Shane (Rodrigues) made the decision. It is an honor to be picked,” Perez said.

Laponis, professor of communications and general manager/adviser for KULV, explained that the entire department’s faculty had a say in choosing Perez.

“The position lasts for one year and carries a high level of responsibility, similar to that of an editor at a newspaper,” Laponis said. “Matt’s past experience in other positions here at the station and his easygoing temperament gave us the confidence that he has the skills to be a leader and aid the rest of the staff.”

Perez is in charge of approximately 36 students and although Laponis is there to help them facilitate their ideas, it is Perez they go to initially. Aside from Radio 426, the two-hour-a-week class that is required, Perez also has a weekly staff meeting to attend, 10 office hours a week to complete and a weekly on-air shift.

Perez’s choice for his major originates from his love of music.

“Anything and everything related to the music business is what I am interested in,” Perez said.

He explains that one day he would love to have his own record label and to produce his own original music.

“Me and a friend have a group called ‘Expanded Minds,'” Perez said. “We create rap, electronic and digital sounds. Both of us write and rap. Our CD is called ‘Proper Foundation.'”

After three semesters of being involved with the station, Perez has gained experience in the different roles that radio has to offer. He has served as music director, promotions director and production director, the latter of which he found excellent.

“Working in the actual studio doing promos and sweepers and getting creative with the equipment is the best,” he said.

Fellow broadcast major Noelle Garcia, a junior, thinks it is great that Perez is the new program director.

“He knows a lot about music; he’s organized and a good student,” Garcia said. “I had an idea for a band to interview this semester and when I went to him with the idea, he was so open.”

When asked about any new ideas he’d like to implement, Perez said, “I’d like to start a specialty show and play more artists back to back. We tend to get lots of requests when we do that.”

Currently, KULV is running a promotion to win tickets to the Los Angeles County Fair by calling in at specific times.

For more information on promotions or to talk to Perez, call the station at extension 4777.

Patriotism for sale
U.S. should look to itself for answers