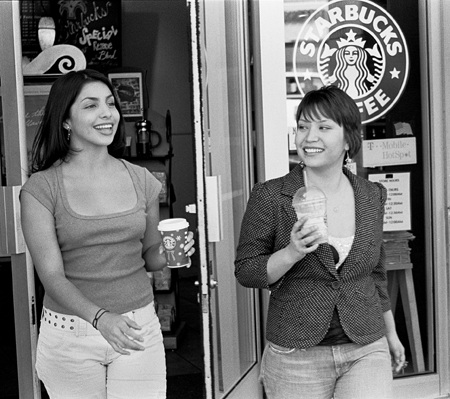 University of La Verne junior psychology majors Daneyda Muniz and Farida Garcia are avid Starbucks Coffee drinkers. Garcia confessed to drinking coffee at least two times a day, every day for the past month. Muniz’s favorite drink at Starbucks is the hot apple cider caramel drink, while Garcia enjoys the caramel frappuccino. Getting a caffiene fix is not uncommon for students. / photo by Jenna Campbell

Being a college student is no easy task. Attending classes an insane number of hours each week, composing term papers as boring as any professors’ lecture and cramming for midterms until the sun rises, is challenging for the average college age scholar.

But luckily, college students do not have to fight the educational battle on their own.

A simple drug delivers students the push they need to become the superheroes that the scholastic world demands.

This drug is not like other drugs. It is not being sold by the local neighborhood pusher. There are no elementary schools urging students to “just say no” to it.

This drug is for sale at local grocery stores, convenience stores and even vending machines right outside most classes. Students stock their mini-fridges and ice chests with it and carry it in plastic bottles.

This drug is caffeine. It is in the chocolate and soft drinks you love, the coffee you constantly crave and even a few of the common pain relievers you take to relieve the irritating headaches that arrive just around finals week.

Caffeine, a mild stimulant that effects the central nervous system, can be found in the leaves, fruits and seeds of many plants.

Many people rely on it for a little boost when they are lacking the energy they want and need.

This drug is not like your average drug and in fact there have been little to no side effects reported from taking caffeine.

While it is not addictive, it is habit forming and that is where the drug correlation may be.

In 1987 the United States Food and Drug Administration found that normal caffeine intake does not produce any sort of irregular side effects or health risks, aside from the occasional headache, fatigue or drowsiness that may result if one ceases to receive their usual caffeine intake.

“If you are addicted and you don’t get your coffee everyday, you will get headaches,” said Fallon Smith, an employee of Starbucks Coffee located on D Street and Foothill in La Verne.

Smith, a freshman at Citrus College, has been working at Starbucks for nearly four months.

She says that her job has allowed her to feed her caffeine addiction, which is convenient considering her hectic schedule.

“When you are on the clock, you get free drinks. I usually have three grande cups per shift, just for the energy to be able to go to work and take night classes,” Smith said.

Smith is not alone in her dependence on caffeine for a little energy boost.

“It is comfortable to study here,” said Julie Villanueva, a fellow Starbucks employee.

Villanueva said she sees students coming into Starbucks, searching for a quiet place to study on a daily basis.

The environment is probably not the only bait luring in local students.

The variety of drinks available to choose from, many of which are filled to the brim with caffeine, keep consumers happy and coming back for more.

“With La Verne being so close, kids come here. They need the energy,” Smith said.

Demanding class and work schedules can drain the energy of many students.

“Students are staying awake to study. You stay up as long as you can to get as much done as you can,” Smith said.

But not all students turn to Starbucks for their caffeinated needs.

Sullivan, who drinks a coffee related drink at least once a week, said that she prefers to go to other coffee shops for her fix.

Coffeeberry, a smaller coffee shop located on Third Street across from the University, provides students and faculty alike with coffee and other caffeinated beverages.

“There is always a morning and a night rush,” said Coffeeberry employee Stuart Wood.

Wood, a senior at Cal Poly Pomona has been working in the coffee shop for three years. He said he drinks at least four shots of espresso daily.

“It doesn’t even have an effect on me anymore. I get headaches sometimes, but not really,” Wood said.

Although no evidence currently exists to prove a correlation between severe health risks and too much caffeine consumption, studies are still being conducted and research is ongoing.

They should also consult their physicians for any suggestions or personal guidelines regarding their regular caffeine intake.

Valerie Rojas can be reached at skalivornia@hotmail.com.