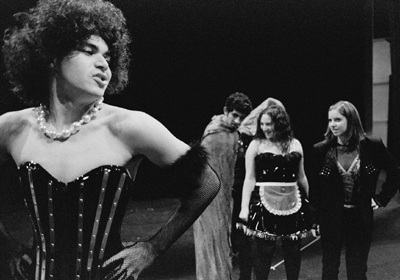 At rehearsals for “The Rocky Horror Show,” Dr. Frank-N-Furter (Jonathan Serret), Riff Raff (Anthony Guerrero) Magenta (Brianna Roth) and Columbia (Whitney Wickum) show off their costumes, which were designed by Ted Shell, a costume designer credited with developing costumes for many celebrities, including Elvis Costello, Steven Spielberg and Michael Jackson. Many of Shell’s racy costumes will be perfected by the time the show premieres, Oct. 30. / photo by Adam Omernik

A myriad of men galloping around in stiletto heels, a tale of a transsexual, and an energetic and talented cast of more than 27 University of La Verne students prancing around in fishnets and thongs will soon be coming to a theater near you.

On Oct. 30, the ULV Department of Theatre Arts will be premiering “The Rocky Horror Show” in the Dailey Theatre, complete with all the chills and thrills that this cult classic entails.

The story begins when restrained-and-content couple Brad Majors and Janet Weiss, played by James Darrah and Sara Kirk, experience car trouble. They turn to a nearby castle in search of assistance and a telephone.

Instead, they find themselves thrown into the wild and uninhibited world of Dr. Frank-N-Furter, a transvestite hailing from Transsexual, Transylvania, played by Jonathan Serret. 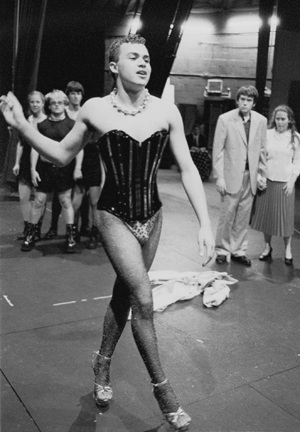 Zack Johnson, the choreographer of the show, also plays a role in the ensemble while simultaneously coaching performers on their movements and positioning. The entire cast often spends hours in rehearsal perfecting their performances with up to 12-hour days. As is the case with many “Rocky Horror Show” productions, the show will be interactive, and the audience is encouraged to bring props and costumes. / photo by Adam Omernik

The craziness ensues as Brad and Janet find themselves doing the “Time Warp” amid a ragtag group of scantily clad characters.

“This show has taught me a lot about theater. We have worked hard and we hope that this really puts us in the focus of the ULV students,” Guerrero said.

“Rocky Horror,” a production that not only encourages but relies on audience participation, has gained notoriety for its sex appeal and tongue-in-cheek humor.

This will be Johnson’s second stab at choreography and his first show at ULV.

“This show is a little more rock ‘n’ roll than my previous shows. It’s a lot more fun,” Johnson said.

A pre-show party, open to the audience, will be held on opening night to kick-off the run of “Rocky Horror,” which opens Thursday at 7:30 p.m., has a midnight showing Halloween night and closes Homecoming weekend.

Before the show, audience members will be able to buy goodie bags packed full of squirt-guns, shreds of newspaper and other tools necessary to become part of the Rocky Horror experience.

“Rocky Horror” has a long tradition of audience involvement. 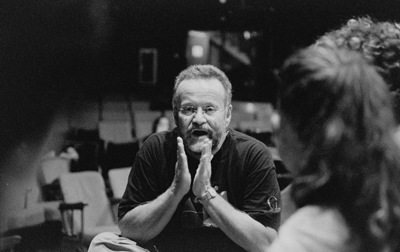 Director Stephen Kent works with members of the cast, dicussing the nuances of their performances. “This is a classic of musical theater,” said Kent. “It will be fun to bring it to life again.” Kent is a hands-on director, who works closely with his performers. / photo by Adam Omernik

For nearly 30 years, the motion picture, “The Rocky Horror Picture Show,” starring Tim Curry, has been calling out to the freaks of the night, lulling in its die hard fans to midnight showings.

ULV’s midnight showing should be no different.

“This is 10 times better than the movie,” Johnson said of ULV’s rendition. “We have a super talented cast, a little bit of clothing and a lot of fun.”

Audience members are encouraged to attend the premiere and any of the other showings dressed as their favorite Rocky Horror character, ready to experience “Rocky Horror” as it is intended to be.

“There is no reason someone should not see this show. It’s insane. It’s fun. It’s close to home and it’s cheap,” Guerrero said.

“Rocky Horror” tickets are $10 general admission and $5 for students, worth every penny.

“It’s a really fun show and it gives you the chance to be extreme,” Rodgers said. 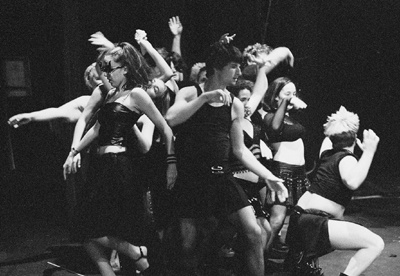 Alison Jones and Daniel Beld lead the rest of the ensemble’s entrance to the “Time Warp” sequence. / photo by Adam Omernik 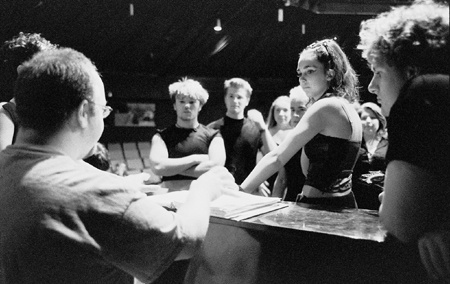 The show’s musical director, Scott Farthing, goes over the vocal numbers with the ensemble: Zack Johnson, Jeffrey Craig, Alison Jones and Andy Hanson. All are confident that the hours of preparation will make the opening of the show memorable. / photo by Adam Omernik 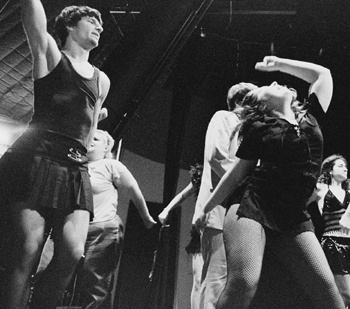 Daniel Beld and Alison Jones, as members of the ensemble, sing and dance in the show’s well known “Time Warp” number. / photo by Adam Omernik