By Matt Griffin, Reina Santa Cruz on May 6, 2005 in Basketball, Football, Softball, Sports 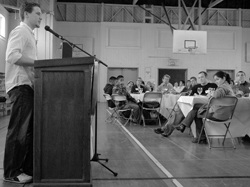 Marc Holmquist, a psychology major and guard for the University of La Verne men’s basketball team, spoke on behalf of all the student athletes a the Scholar Athlete Luncheon Wednesday in the Old Gym. Holmquist was recognized for his achievements both on the court and in the classroom. The luncheon was designed to recognize student athletes who have maintained a grade point average of 3.5 or higher. The student athletes had the opportunity to bring an influential professor or coach as a guest. / photo by Reina Santa Cruz

University of La Verne student athletes with a grade point average of 3.5 or higher were honored Wednesday with lunch in the Old Gym.

All sports were represented by student athletes.

And every athlete honored at the Scholar Athlete Luncheon had the opportunity to invite a faculty member, coach or professor who has helped them achieve their goals in the classroom and in their sport.

Many professors were honored by more than one student and each athlete got to sit with their person of choice while enjoying lunch.

Junior softball player Amanda Jones, who will be going into her final year of softball, brought her professor Jerome Garcia, assistant professor of biology.

Jones also had the honor of giving the invocation before lunch was served.

“It was really nice to see the students and faculty supporting each other,” Jones said. “Being honored at an event like this and being able to invite your professor gives you a good feeling and almost pays off for all the study time you put in.”

Athletic Director Chris Ragsdale honored the professors who were invited to the ceremony and expressed his thanks for their involvement.

He described the teachers as mentors who are there to help La Verne students be successful.

Junior football player Jeff Magdaleno attended the ceremony along with a few of his teammates.

Magdaleno has reached his final year at ULV and expressed gratitude for his time with the Leopards.

“It was cool spending time with some of my old teammates and professors,” Magdaleno said.

“Lunch was good and it was nice to just relax for a little while,” he added.

The ceremony lasted about an hour and a half. All athletes were served lunch and honored with a personal certificate.