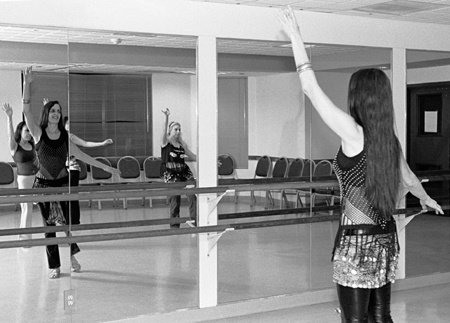 Instructor Catharae Smith has been teaching belly dancing for three years. Smith teaches both beginners and advanced students. Her dance troupe is composed of four female students that perform with her. Smith conducts her classes on Wednesdays from 7:30 p.m. to 8:30 p.m. at the Community Center in La Verne. / photo by Reina Santa Cruz

Belly dancing has roots in all ancient cultures and this dance that stems from the torso has made its way into the La Verne community during the past few years.

The beginning class is open to anyone with interest.

Women of all ages and ethnicities join Smith at the Community Center each week.

Cynthia Moyer, a La Verne resident, just wanted to learn how to dance. After attending the beginner’s class, she learned that it does offer something for everyone.

“You can tell by all of the different colors and sizes in the room that everyone is welcome,” Moyer said. “I look forward to it all week.”

The group of 10 women attending April 14 learned history as well as dancing.

Smith taught the women how to chant in appreciation and about a frequent move that they would use called the camel, which is a body roll that originates at the belly.

They worked on basic moves throughout the entire hour and most of the women broke a sweat from the intense hip movements.

“I feel less toned when I don’t do it,” Moyer said. “It is great exercise.”

Shelly Fowler, a San Dimas resident, said that the belly dancing gets her more in touch with her femininity and makes her feel more powerful as a woman.

After teaching the beginning course for an hour Smith takes a 10-minute break and awaits the arrival of her five advanced students.

The advanced students bring a much more serious mood to the class than the beginning students.

As soon as they entered the classroom, they began discussing the type of costumes they would wear for their next performance.

Most of their costume ideas consisted of bright colors.

Robbin Jorgenson has been belly dancing for 12 years and involved her daughter at the age of 5. They are now both members of the same belly dancing team.

The advanced class was structured as a rehearsal for an upcoming event the group will participate in called the Cairo Carnival.

“It is the biggest event in Southern California,” Smith said.

Everyone in the group is anxiously awaiting the performance and is very passionate about belly dancing and looking forward to having a successful show.

The Cairo Carnival will be held on June 12 and 13 at the Glendale Civic Auditorium.

The group will perform two dances that have been carefully choreographed by them and involve quick and complex movements.

Most of the group members are also involved in the Middle Eastern Culture and Dance Association who is sponsoring the Carnival.

Whether you are interested in learning a little about the culture behind belly dancing, you are just beginning to dance or if you happen to have years of belly dancing under your belt, the La Verne Community Center has something to offer you. For more information, call (909) 596-8700.

Letters to the Editor
‘Ohana’ gathers at luau