By Christine Moitoso, Reina Santa Cruz on April 22, 2005 in News 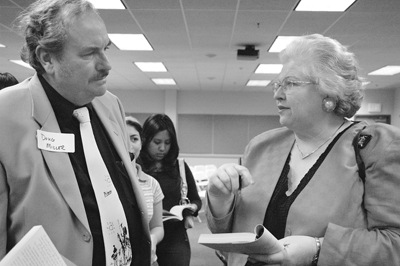 “People who oppose Roe v. Wade don’t see the woman,” said attorney Sarah Weddington of the landmark 1973 U.S. Supreme Court case. Weddington spoke at the University of La Verne College of Law in Ontario as part of the Dean’s Distinguished Speakers Series on Tuesday. Following her talk, Weddington signed copies of her book, “A Question of Choice.” Alumnus Douglas Miller was among those who bought Weddington’s book; he had it signed for his wife. Approximately 200 people attended the event. / photo by Reina Santa Cruz

Sarah Weddington, who made a name for herself by successfully arguing the Supreme Court Case Roe vs. Wade, reflected back on her law school experience as she spoke before an audience of roughly 200 at the College of Law Tuesday.

“The law is the wind beneath my wings and I really hope that the law students enjoy the field as much as I have,” Weddington said.

She talked about how she became involved with career-making 1973 case that made abortion legal in this country – how she argued in front of a three-judge panel in federal court twice.

The judges said that the law prohibiting abortion was unconstitutional, and therefore her case could be argued before the Supreme Court if the high court was willing to hear her case.

“I never thought that the case would go to the U.S. Supreme Court, and after I found out they were willing to hear it, I began my preparations,” Weddington said.

First, she said, she had to file a brief, and since she couldn’t say everything she wanted to say in her brief, she had friends and other women activists file briefs as well.

The second part was the oral arguments and Weddington, who was only 27 at the time, said she had her law school professors help her.

She described in detail the marble floors, the podium, and the huge clock behind the judges so she could watch her 30-minute argument time fly by.

“After my argument was over, I left the Court not knowing if I had won or lost,” Weddington said. She later received a call from somebody from the New York Times asking her if she had a comment, but she was confused. Then the reporter told her that she had won 7-2.

“If anybody would have come up to me and a group of students at law school and said which one of you is going to argue a case in front of the U.S. Supreme Court, nobody would have guessed me,” Weddington said.

Weddington was actually the youngest lawyer to win a case before the U.S. Supreme Court.

The case was about a woman, Jane Roe, who challenged the Texas law that made abortion a criminal offense unless the mother’s life was in danger.

Henry Wade was a Texas attorney who defended the law while Roe said it was unconstitutional.

Weddington argued the case for Roe and won because the court agreed that the laws infringed on Roe’s Fourteenth Amendment right to equal protection under the law.

Thirty-two years later Weddington has become a nationally known attorney, author and professor at the University of Texas at Austin. She served for four years under President Jimmy Carter, directing the Carter Administration’s work on women’s issues and leadership outreach. She also directed White House efforts to extend the time for ratification of the ERA and to assist in the selection of women for federal judiciary appointments.

“I loved working at the White House,” Weddington said. “It enhanced my ability to become a lawyer and I couldn’t complain about the helicopter rides and nice lunches.”

“It is an old case, but it is just as hot an issue today as it was then,” Weddington said.

Following her presentation, about half the audience gave her a standing ovation, while the other half of the room seemed to disagree with her views on abortion.

“I am a strong believer in pro-choice and she was so incredible and real,” said freshman Amanda Calderon.

Professors from the law school attended as well. Kathy Garcia, assistant professor of law and director of academic support, said she thought Weddington was inspirational and a knowledgeable speaker.

“She was wonderful in the way that she connected herself with the law students,” Garcia said.

Her talk was part of the Dean’s Distinguished Speaker Series.