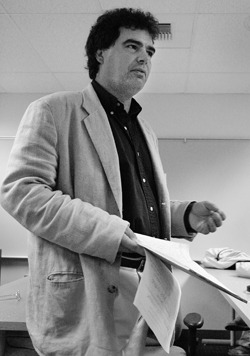 “In one 10-mile stretch (in Louisiana), there are 50 petro-chemical factories that have been spewing chemicals out into the communities,” said Jeffrey St. Clair during a talk on “Nature’s Rapture: Can the Environment Survive George Bush?” St. Clair spoke about the environment and how, in his opinion, the government isn’t taking precautions to preserve endangered animals or the land. The talk was held April 21 in Hoover building. / photo by Reina Santa Cruz

“There’s a lot of rumors going around, but I’ll tell you right to your face, global warming is not a myth,” St. Clair said.

St. Clair, who lives in Oregon, observed the effects of global warming in his city.

Oregon experienced 50 days without rain during the winter; there was no snow in January, and in the winter, the mountains that would receive 800 inches of snow a year, only received 40.

But the weather ought to be gray and in the sixties, St. Clair added.

St. Clair began his speech reading a passage from his book, “Been Brown so Long, It Looked Like Green to Me: The Politics of Nature.”

“I suggest that you travel to Glacier National Park,” St. Clair said. “In 10 years, you won’t see any glaciers.”

St. Clair noted that in the early 1900s, there were hundreds of glaciers in Glacier National Park; however, global warming is eliminating them daily.

St. Clair spoke about the diminishing salmon population of the Pacific Northwest, calling it an “Ecological Equivalent of a black hole.”

“People often think of the spotted owl when they think of the Pacific Northwest.” St. Clair said. “But it’s the salmon.”

St. Clair shared a story about a Native American tribe whose entire culture was centered on the salmon.

The tribes predicted that there would be half a million fish passing through the river on a particular day, however, the tribe only received 157.

“The Colombia Tribes saw this as another sign for the end times,” St. Clair said. “Once the salmon are gone, the Northwest would have lost the core of their identity.”

St. Clair is concerned about the devastation of the environment.

“The Bush Administration blamed it all on the sea lions, “ St. Clair said. “Not the dams, not the cattle trampling on spawning beds, not overfishing, not the hydro-electrical power companies. No. They blamed it on the sea lion.”

“Sea lions, the Al Qaeda of the ocean,” St. Clair said. “Why is it with the Bush Administration [that] death is the default for any dilemma?”

In one ten-mile stretch, there are 50 petro-chemical factories that are spewing its chemical atmosphere into the Mississippi River.

He referred to these companies as “Factories of Mass Destruction.”

“These are the realities that the government denies,” said Professor of English Bill Cook.

About 30 people attended the event.

St. Clair is the author of “Been Brown So Long, It Looked Like Green to Me: The Politics of Nature” and co-editor of Counterpunch.

Alexandra Lozano can be reached at himelozano@juno.com.