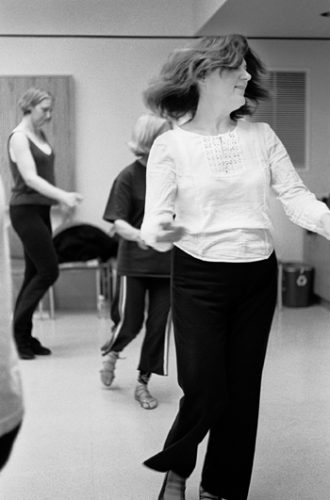 Yael Steinfeld teaches Israeli folk dance to 12 students with a range of dance experience. She tells her students “Don’t look at the feet, just enjoy life.” She instructs her class from 7 p.m. to 9 p.m. Mondays at the Joslyn Senior Center in Claremont. / photo by Reina Santa Cruz

Holding hands, moving to the left, to the right, to the center and every so often making a turn and going back to the same moves, while trying to not lose pace with the music is quite a task.

But Israeli folkdancing is a regular Monday night event at the Joslyn Senior Center in Claremont.

As I pant through the steps that seem to come so easily, gracefully, for the other dozen-or-so members of the class, I question whether my decision to participate was actually the best way to report this story.

“Israeli dancing is for anybody who likes to move and get good exercise,” said student Kathy Ables.

Steinfeld, originally from Israel, who has been teaching the class here for about a year and a half. She added that it is also a great way to meet people.

It is a very athletic dance form, I found, though Steinfeld explained there is more to it – a spiritual element – than, say, aerobics.

It can be a healing experience.

“Everybody should do it,” said Patrick Nicholson, 79, one of the students, who incidentally, proved to have more stamina than I did, despite being thrice my age.

I found out he’d been doing this style of dance for 12 years.

Nicholson, who needed to improve his health, started going to Israeli folk dance classes to get some exercise.

He credits his dancing for lowering his blood pressure and elevating his spirits.

Steinfeld, who grew up on a kibbutz, said that is where she was first introduced to dance. “I was living the music,” she said.

It was part of her family tradition.

As I try to keep up with these folks, the majority over 40, I begin to get what it is they find so soothing: the music, with lyrics all in Hebrew, combined with the movement. It’s repetitive, celebratory.

“Every song in Hebrew is about peace,” Steinfeld said. “There are no songs about war.”

How timely, I think.

As I begin to catch on to the steps – or so I think – I spot Kathy Ables, 48, one of the students, who moves like a pro.

Again I am humbled.

Ables, it turns out, started dancing at age 8. She used to teach ballet.

At the end of the two-hour class, I feel as if I’d played soccer for at least that long.

Yet, I feel uplifted.

The Israeli folkdance class is open to community members and meets every Monday from 7 p.m. to 9 p.m.