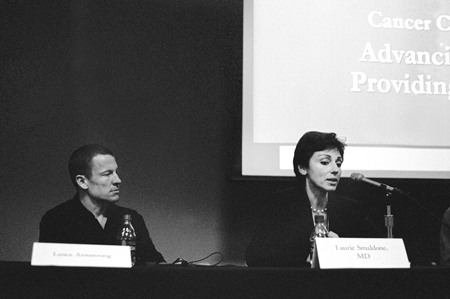 Lance Armstrong and 20 cyclists kicked off the Tour of Hope, which will last eight days and end in Washington D.C., Armstrong, six-time Tour de France champion, was diagnosed with cancer eight years ago and is now trying to help raise awareness of the value of cancer clinical trials for cancer victims. Laurie Smaldone is senior vice president for strategy and issues of Bristol-Myers Squibb, the “Tour of Hope” cosponsor. The “Tour of Hope” kickoff was held Sept. 30 at the City of Hope Cancer Center in Duarte. / photo by Reina Santa Cruz

At the stroke of midnight on Oct. 1, six-time Tour de France winner and cancer survivor Lance Armstrong and 19 other cyclists departed the City of Hope Cancer Center in Duarte for the ceremonial start of a week long relay ride across America. The coast-to-coast event, called the Tour of Hope and sponsored by pharmaceutical giant Bristol-Meyers Squibb, covered 3,500 miles from Duarte to Washington D.C., and made a number of stops along the way to raise cancer awareness and promote research of possible treatments.

The evening began when the up-and-coming rock group “The 88” took the stage and proceeded to fire up the crowd with a set of high-energy hits that included their unique renditions of rock classics “Eight Days a Week” and “Suffragette City.” Shortly after “The 88” finished, emcee Super Steve of KROQ introduced Dr. Michael Friedman, president and CEO of the City of Hope, Friedman addressed the crowd and invited Peter Dolan, chairman and CEO of Bristol-Meyers Squibb, to step up to the microphone. In his speech, Dolan revealed an alarming statistic: only 5 percent of cancer patients take part in clinical trials of possible treatments.

On that note, Dolan introduced Armstrong, and the crowd erupted into cheers.

“I’m a product of a clinical trial,” Armstrong said proudly.

The three chemotherapy drugs Armstrong received during his treatment eight years ago were all the products of clinical trials conducted by Bristol-Meyers Squibb about 25 years prior to his diagnosis. Armstrong said that if it was not for those patients who had tested the medications all those years ago, he probably would not be alive today, let alone be the only rider ever to win the Tour de France six times.

However, the Tour of Hope is only the most recent cancer-related project that Armstrong has been involved in. This past May, the Lance Armstrong Foundation and Nike began selling yellow wristbands that read “Live Strong,” Armstrong’s personal mantra. The wristbands sell for a dollar apiece at most major sporting goods stores and other select establishments. All proceeds go to the LAF.

The LAF was established by Armstrong in 1997 and is dedicated to providing cancer patients, survivors and researchers with services such as survivorship programs, national advocacy initiatives and grants to scientific and clinical research projects.

Even though the wristband campaign has been running for just under five months, the little yellow loops have made plenty of appearances in the news. All sorts of high-profile figures have been spotted wearing one, from newly-crowned IRL Indycar Series Champion Tony Kanaan to Democratic presidential candidate (and prostate cancer survivor) John Kerry.

Naturally, all of this publicity and exposure has piqued the general public’s interest in the program. But for Kevin Holland, manager of the University of La Verne’s photography department, Armstrong and the wristband program hit close to home.

Last July, during a visit to a local bike shop, Holland’s son pointed out a display promoting the “Wear Yellow, Live Strong” program. Holland bought a couple wristbands, and has worn his ever since.

“I think, more than anything, it symbolizes single-mindedness and determination,” he said.

A year ago, Holland had a chance encounter with the riders on the inaugural Tour of Hope. It was like he was destined to cross paths with them, he said.

The story of Robert and Lorecia Brown, an Ontario couple who attended the midnight rally, is just as moving. Robert came to the City of Hope for prostate cancer treatment two years ago, and Lorecia’s brother recently ended treatment for cancer in his throat. The Browns currently have 30 wristbands on order.

Unfortunately, all of this interest has caused the wristbands to be in short supply. The Browns were told that there is a three-week backlog on all orders.

Lorecia, however, feels that Lance Armstrong and his foundation are well worth the money spent and time waiting.

“We need more people like him to help people the way he has,” she said.

Senior ULV journalism major Matt Paulson would agree with Brown’s assessment. This past summer, Matt’s mother was diagnosed with cancer. Shortly thereafter, Matt’s brother purchased about 25 wristbands, and has been gradually handing them out to friends and family.

“I think it’s a great idea,” said Paulson of the campaign, but he doesn’t like how the wristbands have become trendy.

But if more people are buying them, he added, then the more money that goes to the LAF, in which case looking like a pawn of pop culture is an acceptable price to pay for a deserving cause.