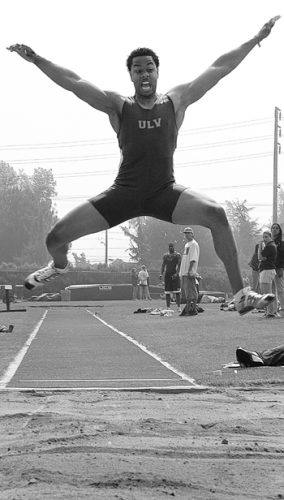 The University of La Verne men’s track and field team placed fifth overall on Saturday at the SCIAC Multi-Dual Meet. Long jumper Donte Witherspoon said about his event, “It’s not easy.” Witherspoon achieved a season best of 22-4 in the long jump to finish fourth overall at the meet. / photo by Reina Santa Cruz

With the overcast weather not playing a factor, the women’s team traveled to Claremont on Friday and came out strong capturing the title over the conference. The women shut out all competition sweeping the meet 7-0.

Johnson and Pearson were not finished. They brought along Krystle Luckey and Deonne McLean and challenged the SCIAC conference to catch them in the 4×100-meter relay. Not only did the four win the event, but they were able to gain a NCAA provisional qualifying time of 48.07.

Over in the field events, freshman Danielle Lampkin also earned a NCAA qualifying mark in the discus. Ellen Soakai lead the conference in the shot put with a throw of 41-10. Erica Pembleton finished the winning off with a hammer throw 151-3.

On Saturday morning the men’s team competed and held their own, placing fifth overall.

Darnell Gilbert led the way with a win in the 100-meter event. Blaine Bacher also wanted a piece of the title and took honors for the 400-meter event with a season best time of 48.82. Bacher and Gilbert were joined by Phillip Craig and Jethro Acenas clinching the win in the 4×100-meter relay.

“We have the best relay team in SCIAC,” Gilbert said. “Our hand offs are clean which gives us the advantage.”

The men hope for a successful showing this weekend, keeping optimism.

“We are fast and ready to run,” Craig said.

“This will be good for us, we will face Division I schools,” said Dennis Parri.

The Leopard distance runners are set to travel to Eagle Rock today to compete in the Occidental Distance Classic.

Combining forces the team will face their next challenge at San Diego competing in the Aztec Invitational at 10 a.m.