By Jenna Campbell, Matt Griffin on February 18, 2005 in Softball, Sports 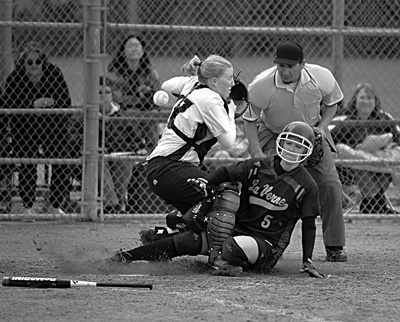 A base hit with the bases loaded allowed Amber Guerra (No.5) of the Leopards to come home safe against Oaks catcher Jessica Courson (No.17), Saturday at Wheeler Park. The University of La Verne’s softball team prevailed with an 8-0, 9-0 doubleheader sweep over Menlo College. They take on the University of Redlands in a three game series this week. / photo by Jenna Campbell

In a two game set, the University of La Verne softball team brought their A game. Not letting a single run score between the two games, La Verne produced 17 runs claiming a victory over Menlo College in both games. In the first game, the Leopards shut down Menlo 8-0 followed by another shut out victory of 9-0.

In game one, sophomore Mary Olson pitched a complete game shut out and only allowed two hits.

The Leopards’ defense was phenomenal. With no errors and perfect pitching, Menlo did not have a chance.

La Verne’s scoring drive started off with back to back home runs by sophomore first baseman Ashley Savage and junior pitcher Amanda Jones, who was filling in at shortstop for the injured Jessica DeGiacomo.

This wasn’t enough for the Leopards. Senior catcher Amber Guerra earned a base on balls, which was followed by a flawless bunt by senior outfielder A.J. Taggart, putting runners on second and third with one out.

Next up was Jones, who also laid down a bunt scoring Guerra and Taggart putting the score at 4-0 in the bottom of the fifth.

In the bottom of the sixth, third baseman Lindsey Padilla hit a double to right field. With another walk earned by Guerra, the Leopards had runners on first and second with no outs.

Jones sealed the sweet victory with a three run homer ending game one.

In game two, Jones pitched exceptionally well, allowing no runs. Guerra and Taggart both earned singles followed by a one out blast by Savage scoring two and putting La Verne in the lead to close the first inning.

An RBI single by Guerra gave La Verne another run putting the Score at 3-0.

With a controversial call in the bottom of the third, freshman Jodi Lindsay was only awarded a ground rule double which looked to be more like a home run by most of the viewing audience.

With runners on second and third, sophomore outfielder Morgan Dobis hit a two RBI single to right setting the score at 5-0 in the bottom of the third.

The scoring frenzy continued with Guerra on her mark hitting a one out home run over the left center field fence.

With the game at 6-0, Dobis was not finished; she placed her number on the home run list by putting the ball over the left center field fence.

A bottom of the fifth single by freshman closing pitcher Karina Ortiz put runners on first and second.

To secure the win, Jones completed the scoring drive with a game ending double scoring by both Ortiz and Guerra.

“We are expecting for Jessica DeGiacomo and Kelly Silagyi to be 100 percent for next week,” Haaker said.

Jones expressed confidence in the Leopards as they begin conference play next week.

“We are ready for conference; we need to just keep coming out with our bats and play solid defense,” Jones said.

The Leopards had a disappointing start to their season dropping their first two games, 4-1 and 7-0 to Point Loma Nazarene Jan. 29. La Verne’s lone run came from second baseman Suzy Riker.

Despite the Leopard’s rough start, the team came back with a vengeance dominating their doubleheader against Hope International University, 8-2 and 4-0, on Feb. 5.

DeGiacomo led the Leopards on the scoreboard with a home run, triple and single in the first game, scoring three of La Verne’s eight runs along with four RBI’s. Jones pitched a fierce game allowing only two runs, in her four inning field time.

DeGiacomo increased her batting average with another two hits and two RBI’s. Taggart sealed off the victory with two hits and one run scored.

The Leopards will be taking on University of Redlands in a three game series this week.

The series begins at 3 p.m. today in La Verne followed by a double header 12 p.m. Saturday at Redlands.