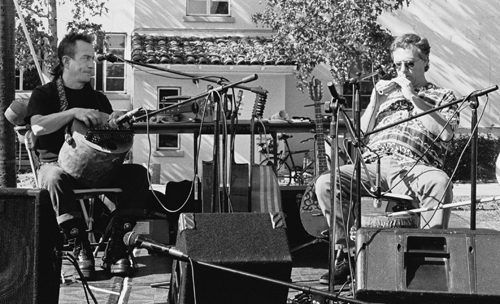 Enzo Fina and Roberto Catalano, both from Italy, have been playing together for 10 years. They play music of Mediterranean Italy, also known as the South of Italy. Their inspirations while growing up, they say, were Carlos Santana and Jimi Hendrix. The duo, also known as Musicántica, played in Founders Auditorium Nov. 12. They also performed outdoors during the World Festival, Tuesday, on the University Mall as part of the International Student Week festivities. / photo by Reina Santa Cruz

“I get so hungry when I hear this music” said Steve Biondo, music department coordinator and lover of Italian food, culture and music. He was referring to the sounds and rhythms of Musicántica, a concert that featured music from Southern Italy’s oral tradition.

Roberto Catalano and Enzo Fina, both Italian immigrants, performed with over 30 instruments, including those that were native to Italy as well as classical guitars and mandolins.

Fina began the concert by softly playing an instrument that he created, the Fina. He began playing it backstage, and slowly approached the stage as the audience hushed.

With his eyes closed in peaceful serenity, he plucked and strummed the Fina, making beautiful music. He knew the instrument so well that it seemed to be an extension of the very hands he used to play it. Like a piano, the Fina was capable of creating dynamic sound, but was confined to the small area of his lap.

After the first few songs, the two musicians welcomed the crowd and gave a short, but adequate introduction to the kind of music they performed: Mediterranean world music. They explained that because Italy is located in the heart of the Mediterranean, their music could not stand alone as simple Italian music. Like all forms of music, it was influenced by surrounding genres, such as those developed in nearby countries.

“Music is culture,” said Fina. “It is the sharing of the feeling of family. We brought a bottle of wine because we drink to our health and to your health, but we will start that later because otherwise we’ll get drunk.”

Although each song was sung in Italian, the meaning and emotion in their music was always clear. In describing an Italian lullaby, Fina struggled for the English words to describe the piece.

Fortunately, Catalano rescued him by describing a simple image. He said it was “like the sound of waves crashing on the shore.”

The second lullaby of the evening was introduced a little bit differently.

“Now, it’s time to boogie,” said Fina in his broken English. “This is another lullaby, but we decide to make it fast because it’s late and we all get a little tired.”

Indeed, this song was no ordinary lullaby. It bounced off the stage with excitement. A guitar and a large tambourine offered percussion that ignited the music. The way the duo united their dynamics was truly impressive.

One of the most memorable songs was about a person who was bitten by a tarantula.

“When you’re bit by the poison of life, no doctor can help you,” Catalano said. “Only a musician can find the right tune for a cure.”

Playing this kind of music is a tradition in Italy. The sick person would lie in bed until the music induced a dance within that person.

This type of music could go on for hours or days. The longest song recorded lasted 28 days, he said.

“Of course they would take a break and rest, but they would resume the music until the time of healing,” Catalano said.

For some audience members, listening to Musicántica was a new experience.

“It was fabulous,” said Harriet Aronow, University Research Coordinator. “I’ve always loved Italian Folk Music, but this was my first time experiencing it first-hand. The sound mixing was sensational.”

“It’s such a different style of music than I’m used to mixing,” Wendt said. “There are about 30 instruments on stage and I have to try to get each instrument’s individual sound without cluttering the stage with too many microphones. I also don’t want to block the musicians.”

For some of the songs, Fina sang the melody line while playing the guitar and harmonica simultaneously. Catalano’s vocalization of a harmony part was both soothing and wholesome.

Although the music alone was outstanding, it was enhanced by short stories that often prefaced the songs they sang.

Catalano introduced one of the songs by telling the story of Sicilian workers who always got together to sing at the end of a long day’s work.

“They had very beautiful voices,” said Catalano. “I will try to be as beautiful for you.”

Fina accompanied Catalano with a peculiar instrument called the Jaw’s Harp. Chuckles from young and elderly audience members alike trickled over the audience as the two musicians began “talking” to each other using the instrument.

The sound from the instrument came from a vibrating piece of metal suspended between two outside pieces of metal. This moment was especially entertaining and was met with warm applause.