By Chrissy Zehrbach, Reina Santa Cruz on November 19, 2004 in News 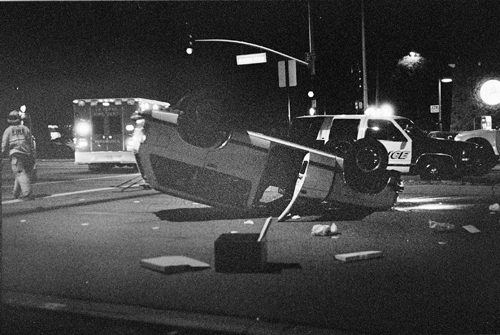 No one was hurt in the accident that occurred Tuesday night between Arrow Highway and D Street, adjacent to the University of La Verne. One of the two Chevrolet Blazers involved in the collision flipped upside down. / photo by Reina Santa Cruz

Traffic was diverted for an hour Tuesday night at the intersection of D Street and Arrow Highway in La Verne when a two-car collision ended with one overturned vehicle.

No serious injuries were sustained in the accident, which occurred when a white Chevrolet Blazer heading westbound on Arrow Highway entered the intersection against a red light and clipped another vehicle in cross traffic headed south on D Street.

“A lady ran a red light and hit another car, causing her to overturn,” said Sgt. Nick Paz, receiving a report from an independent witness.

The impact, which occurred at approximately 5:17 p.m., caused the westbound car to flip and skid farther down the street. The second car, also a Chevrolet Blazer, only sustained damage to the front bumper.

The driver of the second vehicle, who declined to give his name, said he had been waiting behind the railroad tracks and was the second car to enter the intersection when the other vehicle struck his.

The man, who had his 5-year-old son with him, said he was grateful he had not been further into the intersection, fearing he or his son would have sustained major injuries or been killed in the crash.

The driver of the overturned car complained of aches and pains, but declined medical attention.