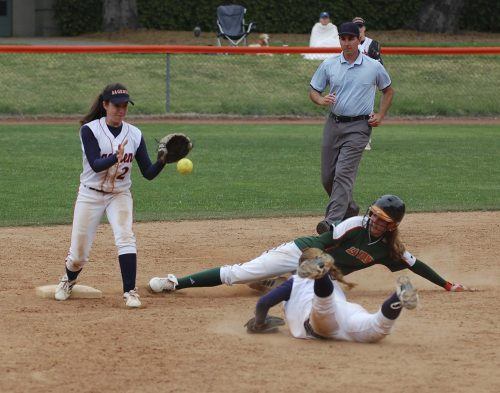 In the fifth inning on April 5, senior Jodi Lindsay advanced to second on an error against the Pomona-Pitzer Sagehens. La Verne tied the game in the seventh inning, but lost in the 10th, 12-11. The Leopards will play Redlands at 2 p.m. today at Wheeler Park. / photo by Jaclyn Dino

With the season halfway gone, the University of La Verne softball team, which won seven of their last eight games, traveled to Wig Beach diamond in Claremont last Saturday to play a crucial conference doubleheader against Pomona-Pitzer.

The Leopards battled in both games but failed to come up with enough runs or defensive stops, losing game one 5-1 and game two 12-11.

With the losses La Verne fell to fourth place in the Southern California Intercollegiate Athletic Conference.

Their overall record now stands at 15-13.

“They’re a good team, but we’re good enough to have beaten them,” senior third baseman Lynsey Padilla said. “What hurts the most is we beat ourselves.”

The first game was filled with miscues by the Leopards who did not seem to match the offensive intensity that the Sagehens played with. Pomona-Pitzer came into the game on fire scoring four runs in the first two innings.

Senior pitcher Jessica McLaughlin got the start for the Leopards but struggled early on and was unable to stop the damage from the Sagehens batters as they scored four runs on seven hits.

McLaughlin was replaced in the second with senior pitcher Karina Ortiz.

Ortiz was solid throughout allowing only one run in five innings.

The defensive battle was a back and forth game as both teams got great performances from the pitchers.

While La Verne’s defense was solid their offense was stagnant, as their only run of the game came in the top of the fourth inning off of an RBI single from senior shortstop Trisha McCormick.

“Playing a big conference game like that against a solid opponent we can’t afford to come out flat and play catch up.”

If game one was all about defense, then game two proved to be the opposite.

The second game started out quickly as the Sagehens jumped on the board again scoring four runs in the first two innings.

The Leopards responded scoring two runs in the second and third innings to tie the game.

Pomona-Pitzer kept scoring runs and pushed their lead to as many as three runs by the fifth inning.

Up one run the Sagehens scored three in the bottom of the sixth to extend their lead to four.

The top of the seventh proved to be the most productive for the Leopards as junior catcher Melissa Carlson’s three-run homer with two outs cut the deficit to one.

Ortiz would go on to score the tying run as ULV rallied to tie the game 10-10. With the game still tied heading into the top of the 10th inning the International Tie Breaker was enforced.

This form of tie breaker starts the inning out with a runner on second base for the team at bat.

In the top of the 10th with a runner on second, Padilla hit a sacrifice fly to center to score Brenner.

Down for the first time in the series, the Sagehens answered with two runs of their own to win the game 12-11.

The high scoring game produced 33 runs and 30 hits from the two teams.

“Our hitting was good but we made a lot of mental errors,” freshman pitcher Delaney Baylor-Dick said.

“Both teams never gave up; it was just a matter of who gets the win and who get the loss.”

“I’m proud of our team for fighting to get back in the game and not quitting when we were down,” Padilla said. “We know what we have to do and it’s up to us to execute.”

The Leopards return to action today at 2 p.m. against Redlands at Wheeler Park in La Verne.