By Rhiannon Mim, Richard Lugo on February 29, 2008 in Baseball, Sports 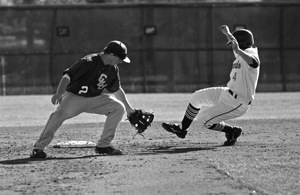 During the fifth inning of Monday’s game against Cal Lutheran, Leopard Trevor Boucher was safe at second base when Cal Lu’s Chad Heschong lost the ball. The game began Friday and was suspended because of rain in the fourth inning, then resumed Monday afternoon. The game was tied 12-12 in the 11th inning when it was halted due to darkness and will be finished later in the season. / photo by Rhiannon Mim

Friday’s game was suspended due to rain and completed on Monday in what ended in a dramatic 11th inning 12-12 tie.

The game will be resumed again later in the season on a date to be determined.

Saturday’s doubleheader was played at Ullman Stadium in Thousand Oaks where the Leopards shined, winning both games, 9-4 and 7-1.

“Our offense has started to get in gear. We’re getting better at bats, and our offensive momentum has been carrying over to our defense,” sophomore pitcher Tim Jolly said.

Senior shortstop Jack Mehl got the Leopards off to a quick start in the first inning of game one when he hit a two-run home run to left center field.

In the third inning, ULV continued their onslaught of base hits, walks and moving runners into scoring position.

The Kingsmen responded in the sixth inning to add two runs and cut the deficit to three, but the Leopards’ offense persisted.

In the eighth inning, Mehl hit a triple to left center that drove in two more runs to give ULV a comfortable lead.

Mehl finished 4-for-5 at the plate, scored three runs and had four RBIs.

Longnecker also added three RBIs and batted 2-for-4. Senior pitcher Jimmy Wilfong finished off the game and got the save.

“Our pitching has been largely consistent and talented. Sweet gave us a chance to win, and Wilfong grinded it out and got the job done,” head coach Scott Winterburn said.

“We had a really good week of practice,” senior designated hitter Scott Marcus said. “We’re jumping ahead early, scoring runs and our pitching has been the dominant.”

The Leopards continued scoring runs and their defense continued to make plays in game two.

Marcus’ triple to right center in the first inning drove in two runs and made the score 3-0.

The Leopards’ fast start continued in the second and third innings where they added four more runs.

“We hit the ball better than we did all year long,” Winterburn said. “We did a great job of doing the little things. Our hitters were patient and we took advantage of our good starting pitching.”

Cal Lutheran’s starting pitcher David Brethouwer was pulled from the game in the second inning after allowing 10 hits and six earned runs.

Jolly pitched his best game of the season so far with seven strikeouts, and no earned runs in seven innings of work.

“I felt good out there. I was just trying to throw strikes, make them hit ground balls and pop fly’s and it was working,” Jolly said.

“Our pitching staff has done really well; we’ve been anchored down by the bullpen in crucial situations and been able to get outs,” Jolly said.

The Leopards held the Kingsmen to only one run on four hits. Marcus who batted 3-for-5 with two RBIs had another productive game for the Leopards.

“Our team doesn’t take anything lightly. We’ve got to keep doing what we’ve been doing, continue to not slack off and understand that every game counts,” Marcus said.

Monday’s exciting continuation game was completed but the game would have no victor.

After trailing 11-9 in the bottom of the ninth inning, Marcus blasted a two-run home run to tie the game.

The Kingsmen fought back with a run in the top of the 11th inning to take the lead, 12-11.

The Leopards’ Jon-Michael Hattabaugh answered back with a solo home run to tie the game 12-12. The umpires called the game about 5:45 p.m. due to darkness.