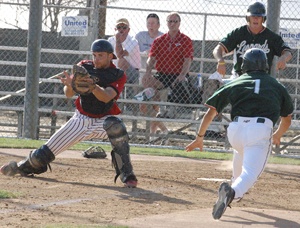 Freshman Sergio Munoz scored on an RBI by La Verne’s Mike Belcher on March 21 at Ben Hines Field. The game against Rutgers-Camden ended after the seventh inning with a score of 12-2. The Leopards will play against Whittier at home on Saturday. / photo by Jaclyn Dino

While classes were out, parking lots were empty and students were scattered for spring break, Ben Hines Field was alive last weekend as the Leopards hosted the California Invitational.

After losing its first game, La Verne got on a hot streak and went on to win three games in a row, outscoring their competition 32-6.

“Our bats and our pitching got hot,” junior pitcher Jesse Sweet said. “When we’re scoring runs like that I don’t think there’s anybody who can beat us.”

On Thursday, the Leopards lost the opening game of the invitational to Franklin & Marshall College, 9-4.

La Verne jumped out to an early lead in the second inning off sophomore center fielder Demetri Mondotte’s sacrifice fly which drove in the first run of the game.

The Leopards added another run in the fifth inning from sophomore left fielder Jason Munoz’s double to right center which gave his team a 2-0 lead.

The Diplomats answered back in the bottom half of the inning scoring four runs.

The highlight of the scoring came on a two out double to left center field by Rich Gallugi that added two runs.

Franklin & Marshall continued its offensive production in the sixth tacking on two runs to extend its lead to 6-2.

The Leopards would score two more runs in the seventh but it was not enough as the Diplomats added three runs in the bottom half of the inning to make the score, 9-4.

Senior Jimmy Wilfong got the loss.

La Verne played a doubleheader Friday facing Rutgers-Camden at Ben Hines Field and then traveled to Azusa Pacific to play an evening game against Wesleyan.

In the first game ULV jumped out to a quick lead by scoring in each of the first three innings taking a comfortable 6-1 lead.

Sweet, who pitched a complete game for the Leopards, allowed just one earned run, and struck out seven to earn his third win of the season.

The ULV offense continued their scoring in the sixth and seventh innings adding three runs in each and winning the game 12-2 due to the 10 run rule. La Verne was led offensively by Marcus who batted 2 for 4 with two home runs and four RBIs.

“With a big lead I was just trying to throw all fastballs and keep the ball in play,” Sweet said.

In the night game against Wesleyan the Leopards got off to another fast start. La Verne jumped out to an early 5-0 lead in an exciting second inning off four hits, one stolen base and an error.

Sophomore right fielder Mike Belcher’s single to left in the third inning added another run to make the score 6-0.

The Leopards would proceed to score one run in the fourth and sixth inning, and added three more in the seventh to enact another 10-run rule and win their second straight game. La Verne was led offensively by Munoz who batted 4-for-4 with three RBIs.

Sophomore Tim Jolly pitched a complete game, allowing only five hits, one earned run and striking out eight to earn his fourth win of the season.

“It felt really good to have run support from our offense, especially early on,” Jolly said. “I was able to put pressure on the strike zone and that was key.”

In the last game of the tournament, La Verne played UMass-Dartmouth at home.

After allowing two runs in the top of the first, the Leopards responded with two runs of their own in the bottom half of the inning to tie the game.

The Corsairs scored one run in the third which would be there last as ULV’s pitching and defense shut them down the rest of the game.

After trailing 3-2, the Leopards rallied to score seven runs, and won the game, 9-3.

The highlight of run production for ULV came in the sixth, where they put up four runs. Freshman center fielder Eddie Kalankiewicz led La Verne batting 2-for-2 with four RBIs.

Senior Ryan Rose got his fourth win of the season.

“We played pretty good,” Marcus said. “We put some wins together and that’s what we needed going into conference.”

“Our mindset is to take the momentum from the tournament,” Sweet said. “Every game and every pitch means a lot in the second half of the season.”

Prior to last weekend’s games, the Leopards played four games and won two, against San Diego Christian, Ithaca and Kean.

ULV will play in a three game series against Whittier this weekend, beginning today at 3 p.m. in Whittier.

Tomorrow La Verne will host the doubleheader beginning at 11 a.m.

The Leopards are currently fifth in SCIAC standings and Marcus leads the conference with 10 home runs.