By Rhiannon Mim, Richard Lugo on February 15, 2008 in Baseball, Sports 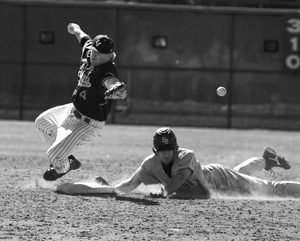 At the bottom of the eighth inning, center fielder Marc Tuttle of Cal State East Bay hit a double and was safe on a bad throw to second baseman Trevor Boucher. The Leopards played a doubleheader on Saturday against the Pioneers, losing the first game, 9-4, and winning the second, 14-6. La Verne will host a doubleheader against Texas Lutheran today at Ben Hines Field. / photo by Rhiannon MIm

With blue skies, lots of sunshine and the sound of roaring engines coming from the National Hot Rod Association Nationals down the street, the University of La Verne baseball team played a three game series against Cal State East Bay at Ben Hines Field last weekend.

The Leopards dropped two of the three games to the Pioneers who seemed to score in bunches and played solid defense when they needed it the most.

“We did a lot of good things; we just didn’t execute all the small things,” sophomore reliever Grant Wheatley said. “Once we did we played well.”

Saturday’s doubleheader was filled with a lot of offense from both teams. Cal State East Bay won game one, 9-4.

ULV’s senior pitcher, Ryan Rose was unyielding in the first three innings giving up only two hits and no runs.

The Pioneers were catapulted by a seven run fourth inning that was highlighted by a two-run homerun from Michael Thomasson.

The Leopards battled back in the game scoring four runs on five hits but it was not enough to catch up with the Pioneers who never backed down.

East Bay was able to maintain their lead due to a strong performance from pitcher Matt Vera who gave up three hits in six innings.

“Our biggest challenge was the little things, getting hits, moving the runners, stealing bases,” head coach Scott Winterburn said. “These things can be developed; we just have to do it at a quicker pace.”

In game two, ULV found their bats and put them to use winning the game 14-6 to split the doubleheader.

The Leopards got off to a great start in the first inning when senior second baseman Trevor Boucher hit a grand slam to give his team the lead. Boucher, who hit two homers in the game, went 3 for 4 at the plate and finished with five RBIs and three runs scored.

CSUEB struggled to find the offense that propelled them in game one and were stifled by the Leopard’s pitching.

With plenty of run support and solid defensive play, ULV’s senior reliever Jimmy Wilfong was able to get the win, pitching four innings of relief allowing only two hits.

The Leopards’ 14-6 victory was their highest scoring game of this young season.

“We played well, we didn’t give up and just kept battling,” sophomore pitcher David Contreras said.

Sunday’s game was the closest of the series between ULV and CSUEB.

The Leopards got off to another good start in the second inning when sophomore Jon-Michael Hattabaugh hit a two-out double with the bases loaded and drove in three runs to give the Leopards an early 4-0 lead.

The Pioneers bounced back in the third inning, and did so with ease, loading the bases with no outs.

The Leopards buckled down to get out of the inning but not before the Pioneers’ Mark Marelich dramatically stole home base tying the game, 4-4.

After several lead changes, ULV found themselves down 9-6 heading into the bottom of the eighth inning.

ULV scored two runs to cut the deficit to one run but were unable to score again and fell short with a 9-8 loss to East Bay.

“It’s important to evaluate the process more than the results right now,” Winterburn said. “We have a good group of young men who work really hard. It’s only a matter of time for it all to come together.”

“We’re all on the same page; our chemistry is down pat,” Contreras said.

The Leopards will look to improve their mark today at noon when they host a doubleheader with Texas Lutheran at home.