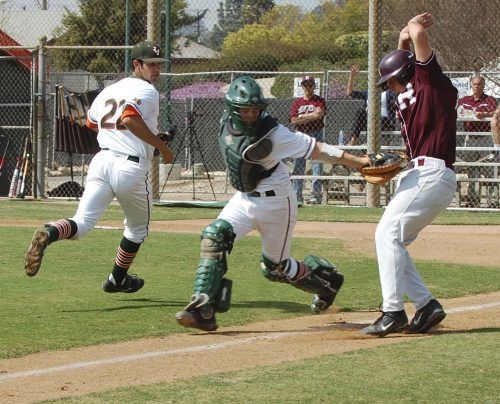 In a pickle between third baseman Aaron Coopman and catcher Mike Moretti, Redlands Bulldog Jefre Johnson is tagged out at home plate in the first inning. La Verne went on to lose to Redlands in the first game, 5-4, but came back to trounce the Bulldogs in the second game, 16-5. The Leopards will host the California Invite over the break. / photo by Jaclyn Dino

Scoring runs has not been a problem for the Leopards this season; however, scoring more than their opponents has been as of late.

The Leopards lost Friday’s game in a 12-11 shootout that once again came down to their last at bat with runners on base.

With the losses, La Verne dropped their conference record to 3-2-1 and their overall record to 7-6-1.

Friday’s series opener, which was played at The Yard in Redlands, saw both teams combine for 23 runs and 29 hits. The Bulldogs got started early putting up three runs in the first inning.

Redlands’ sophomore catcher Jefre Johnson highlighted the inning with his triple down the right field line to drive in two runs.

Johnson, along with his teammates, would continue to collect hits and generate runs in each of the first six innings jumping out to a comfortable 12-5 lead.

The Bulldogs were led by junior left fielder Matt Goldstein who scored twice and batted two for four with three RBIs. ULV scored consistently but not at the same pace as the Bulldogs and fell behind early.

They scored three runs in the seventh, one run in the eighth and two runs in the ninth to make the score, 12-11.

With two outs and two runners on, the Leopards had a chance to tie the game but were unable to score again.

ULV left 11 runners on base in the game. Junior second baseman Mike Moretti led the Leopards with three RBIs.

“We can’t afford to take a moment off, and we had some lapses,” Moretti said.

Game one of Saturday’s doubleheader at Ben Hines Field saw the Leopards lose for a second straight time dropping the game, 5-4.

Again the Bulldogs were able to win by a single run and left La Verne looking for answers.

After trailing 2-1, sophomore first baseman Jon-Michael Hattabaugh hit a solo home run to lead off the bottom of the fourth inning and tie the game.

The Leopards scored another run later in the inning off freshman third baseman Aaron Coopman’s double that drove in a run giving ULV a 3-2 lead, their first of the series.

Redlands answered back by scoring two runs in the fifth and one run in the sixth to reclaim the lead, 5-3.

In the bottom of the sixth, Coopman hit his second double of the game to score a run and cut the deficit to one run.

The Leopards were led offensively by Coopman who batted 3 for 4 with three RBIs. Neither team would score again as the Leopards went on to lose the game 5-4.

“The whole team is disappointed,” sophomore pitcher Grant Wheatley said. “We did a lot of good things; we’ve just got to put everything together and do all the small things right.”

With their backs against the wall, and facing their first three-game losing streak of the season, La Verne seemed to put it all together in game two.

The Leopards wasted no time by jumping out to a 3-0 lead in the first when Hattabaugh hit a three-run home run.

After adding a run in the second, ULV senior second baseman Trevor Boucher hit a two-run homerun to extend their lead to 8-0.

Redlands showed some life in the sixth driving in three runs; however, La Verne responded with six runs of their own in the bottom half of the inning. The offensive outburst was highlighted by Marcus’ three-run homerun.

Each team scored once more but the damage was too great as La Verne salvaged the series, winning game two 16-5.

Sophomore pitcher Tim Jolly earned his second win of the season to improve his record to 3-2.

“This game was a good example of how the rest of the series should’ve gone,” Marcus said.

“I feel we missed an opportunity to assert ourselves as an elite team,” Moretti said. “We’ll have a good opportunity this weekend to measure up against some good teams from across the country.”