By Cindy Harder, Marla Bahloul on October 2, 2009 in News 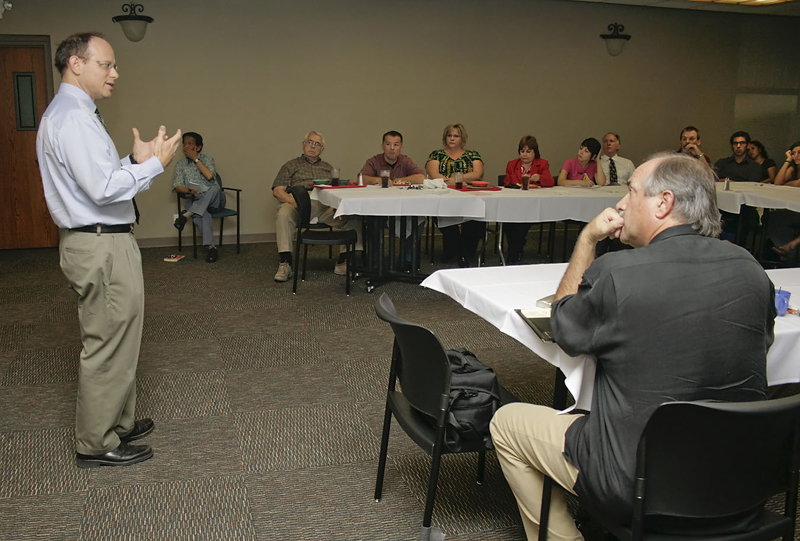 Fielding a number of thought-provoking questions, Kenneth H. Marcus, associate professor of history, spoke on the topic, “Why we need to rethink Immigration” on Sept. 24 in the President’s Dining Room. Marcus’ lecture is one of a series, called Hot Spots, presented on the third Thursday of each month. The next event is scheduled for Oct. 22. / photo by Cindy Harder

With such issues as migrant labor, illegal immigration in the public consciousness, Kenneth Marcus, associate professor of history and director of the International Studies Institute, chose immigration as the theme for this year’s Hot Spots speaker series.

Marcus kicked off the series Sept. 24 with a lecture titled “Why we need to rethink Immigration,” which looked at notions of identity, and legal and illegal immigration through a historical context.

The 2009-2010 agenda foresees a number of immigration colloquiums, allowing students and faculty alike to participate.

“I think we’ve all heard the old cliché, ‘America is a nation of immigrants,’” Marcus said.

Marcus brushed up on the Open Door Policy of the late 19th century, maintaining that immigration to the United States usually comes in waves, with the first notable one being in the 1880s.

He then presented a number of acts that has prohibited immigration to the U.S., raising discussion on exclusion policies.

“In thinking things in a historical context, this is not just an American problem. This is very much a global problem,” Marcus said.

A shift to legalism was then drawn after Marcus’ introduction.

The topic of identity then came to hand with Marcus asking how one defines an American.

“The United States has had to redefine its identity numerous times,” Marcus said. “In the first two-thirds of this country’s history, immigration was largely white and European, yet some groups, like the Irish and Jews, were not accepted as white until the postwar era.”

The notion of certain Europeans not being recognized as “white” drew debate over European hierarchy and the history of “whiteness.” The conclusion of Marcus’ presentation opened the floor to discussion.

Jack McElwee, professor of business administration, sustained the belief that environmental declines give way to immigration.

McElwee spoke of his Irish decent and the Great Potato Famine of the 19th century compelling his family to immigrate.

“Anyone coming to California is coming for clean water and food. Resources they need,” McElwee said. “How could you possibly shut out people who can find resources in other countries?”

Economics proved to occupy a majority of the discussion, with conversation about low-waged labor profiting the United States.

“An important part of the immigration story is how migrant labor benefits the monied classes in the destination societies,” said Jason Neidleman, associate professor of political science. “Migrants tend to be willing to work for low wages and this, in turn, depresses overall wages in society.”

“Consequently, the monied classes have an interest in a steady flow of migrant labor,” Neidleman said. “This is surely part of the reason that the United States has not been particularly vigilant about stopping illegal immigration.”

Discussion was furthered by Professor of Accounting Claudio Muñoz.

The discussion ended with Institutional Review Board Chairman Fred Yaffe questioning the origin of illegal and legal immigration.

“When did the notion of illegal immigration start? Weren’t the pilgrims illegal?” Yaffe asked.

The next Immigration Hot Spots will be held Oct. 22, with the La Verne debate team discussing immigration and amnesty.