By Ben Weybright, Kristen Campbell on February 12, 2010 in News 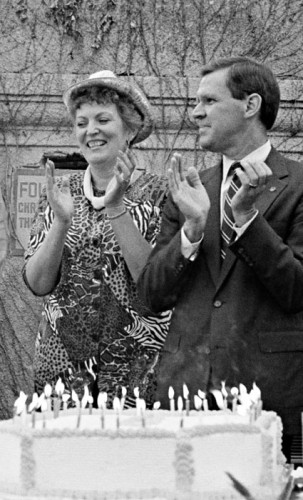 Myrna Wheeler and President Stephen Morgan participate in the University of La Verne’s centennial celebration in 1991. Wheeler served on the Board of Trustees for nearly 25 years. / file photo by Ben Weybright

Myrna Long Wheeler, respected alumna and trustee of the University of La Verne, died Jan. 9 at her home in San Dimas after fighting acute myeloid leukemia for several months. She was 70.

She graduated with a bachelor’s degree in sociology from La Verne College, as the University was known at the time, in 1960 and later served nearly 25 years as a member of the Board of Trustees, chairing the student affairs committee.

“She was so committed and passionate about students,” said Loretta Rahmani, dean of student affairs.

“Her leadership demonstrated she wanted the best for La Verne students,” she added.

“If there was a job description for a ULV alumni, she fit it perfectly,” President Stephen Morgan said. “She lived the ULV values throughout her life and was dedicated to the students.”

Mrs. Wheeler taught in the Covina Valley Unified School District for 37 years, retiring in 2001. Almost immediately after her retirement, she was hired as Chaplain at the Hillcrest Retirement Community in La Verne. She was also on staff for the La Verne Church of the Brethren as minister to older adults.

“Despite my mother’s many activities, she was extremely organized. She even wrote her own obituary,” daughter Julia Wheeler said.

Travel was very important to Mrs. Wheeler in order to have a broader world-view. She traveled to Europe, Greece, Egypt, Turkey, Chile, Peru, Panama, Aruba and South Africa.

“She was a warm person who invited hugs, so when she was in her later stages of cancer, it was odd not being able to embrace her,” said fellow church member, and adjunct professor at ULV Randy Miller.

She co-chaired ULV’s Centennial celebration in 1991 and received the Centennial Medal of Distinction as well as being honored as the Alumna of the Year in 1993.

Her other honors include being nominated by Hillcrest as Philanthropist of the Year for National Philanthropy Day in November 2009.

A memorial service celebrating Myrna Wheeler’s life was held at 10:30 a.m. on Saturday, Feb. 6, at the La Verne Church of the Brethren. In lieu of flowers, memorial contributions may be made to the Myrna Wheeler Chaplaincy Fund at Hillcrest Homes in La Verne.