By Christopher Guzman, Kristen Campbell on December 10, 2010 in News 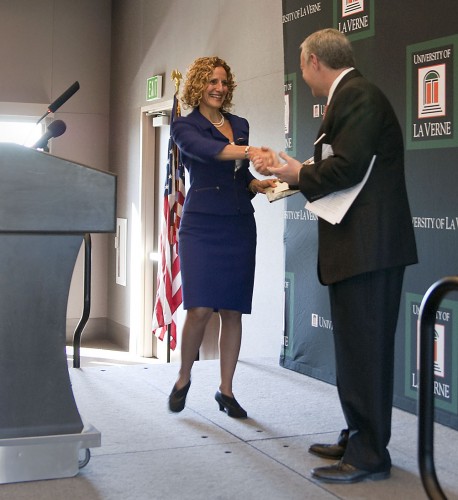 Greeted by a standing ovation, Devorah Lieberman is welcomed to the platform in the Campus Center by Chairman of the Board of Trustees Luis Faura on Wednesday. Lieberman previously served as provost and vice president of academic affairs at Wagner College in Staten Island, N.Y. Lieberman plans to spend some time here before assuming responsibilities in July. / photo by Christopher Guzman

Devorah A. Lieberman, provost and vice president of academic affairs at Wagner College in Staten Island, N.Y., will be the University of La Verne’s 18th president, starting July 1, 2011.

“This is definitely a momentous occasion for the Univer­sity,” said Luis Faura, chairman of the Board of Trustees. “It was a tremendous challenge of time, effort and commitment to spend the 10 months of the search.”

“I was not sure that I would ever live to see a woman president,” said Sharon Davis, professor of sociology. “I, as well as several other faculty, admit to getting tears in our eyes. It is an absolute miracle to have a woman leading the charge.”

Only 23 percent of university presidents nationwide are women, according to the most recent figures from the American Council on Education.

Late Monday afternoon, administrators sent out campus-wide e-mails to faculty and students explaining the new president would be announced the next morning.

At the request of Wagner College, both schools made a simultaneous public announcement.

La Verne held a special introduction event Wednesday morning in the Campus Center. As Lieberman was introduced, she received a full-house standing ovation.

There was also a reception Wednesday afternoon on the main floor of the Campus Center open to the entire campus and community.

“From the bottom of my heart, I am humbled, honored and very enthusiastic to be at ULV,” Lieberman said. “This university values what I value; the quality of life for its students, faculty and community.”

La Verne began the 10-month presidential search process following Morgan’s announcement on Feb. 18 that he would retire in 2011.

The University Board of Trustees hired Witt/Kieffer, a national firm specializing in executive searches, to help with the search.

At the same time, a presidential search advisory committee was formed to review qualified applicants, conduct interviews and present the Board with selected finalists and accompanying recommendations.

Out of more than 60 applicants, Lieberman was chosen as the president select, and when the University offered her the position, she accepted.

“I knew Devorah was a winner when we discovered we were both Covina Colts,” Morgan said. “She lights up a room with her passion for the students.”

Roger Auerbach, her husband, is the principal of Auerbach Consulting and he works with state governments on long-term care issues for older and disabled adults.

They have two daughters. Allie Lieberman-Auerbach earned a bachelor’s degree at George Washington and a master’s degree in public health from the University of North Carolina at Chapel Hill, and Emery Lieberman-Auerbach is a freshman attending Scripps College in Claremont.

“I am proud of my mom because she has always worked so hard for this,” Emery Lieberman-Auerbach said. “I wanted to go to school 3,000 miles away from my parents, but now they are only three miles away. It will be nice to have them close, though.”

Until she comes to ULV, Lieberman will continue her administrative duties at Wagner.

She plans to return to ULV for a few days every month, beginning in January, to expand her knowledge. Her family will be moving here in the summer.

“A University is not an ivory tower; it is a part of a community,” she said. “I always have loved my job, because I believe in the students. I hope everyone sees that once I start here, students will always come first.”