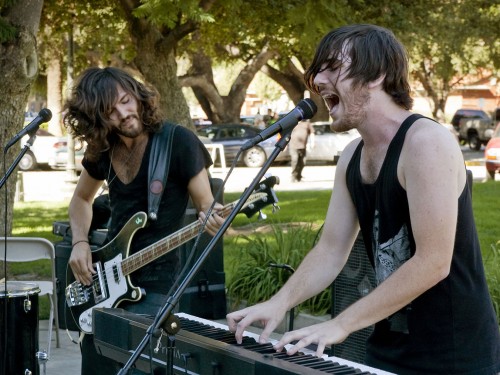 Heartstop, featuring Jake Hawkes on keyboard and Tristan Montgomery on bass, rocked out for students Wednesday in Sneaky Park as part of a week of Las Vegas-themed homecoming events at the University of La Verne. Heartstop, a Los Angeles-area band has performed at the University before, most recently in May with the Red Jumpsuit Apparatus in the Frantz Athletic Court. / photo by Christopher Guzman

Though despite the shortened timeframe, Heartstop made an impact of its audience performing one of its hits “Lullaby,” and a cover song by another artist, among others.

“I love their music,” said Roxanne Garcia, senior business administration major. “Their lyrics are amazing and the lead singer has a great voice. I was really enjoying the performance until they stopped it,”

Garcia is not alone in her admiration of the band; this is its third time performing at the University of La Verne.

“Heartstop is one of my favorite bands, I think every concert they play is amazing,” said senior English major Brenda Bakabak.

Despite the fact that the band has yet to sign with a record label,it seems to be doing quite well.

Since its performance here last spring, the band has been performing consistently at various venues from Orange County to Hollywood.

“We get our gigs the old fashioned way by going out to different bars and clubs, and a few hook-ups from our close friends,” Heartstop’s lead singer Jake Hawkes said. “We’ve played close to 250 shows since we’ve been together.”

The band has also had airplay on Los Angeles’ top rock station KROQ has had its music featured on MTV.

The band played a few of its new singles Tuesday titled “You Know You Don’t” and “10/16,” from its self-titled EP, during Wednesday’s concert.

The band has a very unique system of composing songs for the albums, Hawkes said.

“I write most of our songs, though my style of writing is pretty slow and mellow. So I usually give it to Tristan and Joe so that they can speed up the tempo and give it a nice beat. It’s like they put a little Timbaland twist on it,” Hawkes said.

The group formed in 2003 as a metal band, though lead singer Hawkes and bass player Tristan Montgomery were not as into the genre as they thought they were.

“I try to make our music and lyrics as relatable as possible so that other people can enjoy listening to the music just as much as we enjoy playing it, “ Hawkes said.

Since those metal days, the band has changed its drummer and its genre of music to fit a more pop and punk sound.

“One day we hope to go mainstream,” Hawkes said. “Even though many people put a negative connotation on the word and see it as selling out, it would be nice to have more people hear our music.”

The band has received many offers to sign to different labels, but the members agree that they are not going to settle for just any deal and hope that as they progress musically, they will not have to.

Heartstop’s previous performances at the University of La Verne were on April 28, then again as the opening act for the Red Jumpsuit Apparatus on May 14.

Many of Heartstop’s songs can be found on iTunes, or on the band’s website, heartstoprock.com.