By Amy Babin, Annunciata Williams on February 10, 2012 in News 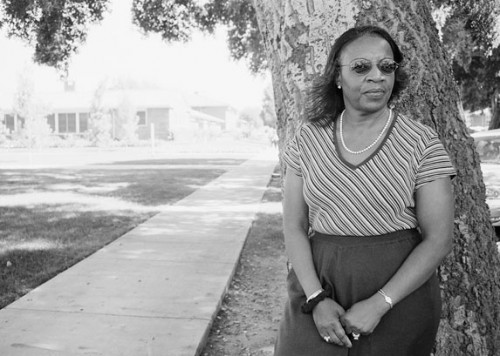 Leatha Webster, director of financial aid, died on Jan. 3 due to complications from multiple myeloma. She moved to Southern California with her only son in 2003 to accept the position at the University of La Verne. Webster continued to work at the University of La Verne until her death last month. Her ashes were sprinkled in the Pacific Ocean. / file photo by Amy Babin

Leatha Webster, who served the University as director of financial aid since 2003, died after a relapse of multiple myeloma on Jan. 3.

She is remembered lovingly by all those who knew her.

“I was completely and utterly blessed to be able to work with her” said Erika Gayoso, who worked closely with Webster as a financial aid adviser.

Mrs. Webster was born in Buffalo, N.Y., on Dec. 21, 1943, to Alexander Barnes and Mary Ward. Mrs. Webster and her parents moved to San Francisco when she was 13.

She was a member of the First Union Missionary Baptist Church youth choir and gospel choir as a teenager, and served on their board of trustees as an adult.

Webster married Laurence Crump in 1962 at the age of 19 and they had one son, Laurence, Jr. Because of her husband’s dedicated service in the U.S. Army, their family moved around frequently. In 1969 Mrs. Webster worked for the College of San Mateo as a financial aid officer.

Mrs. Webster was married again in 1977 to Roy Webster. He was a retired United Airlines employee, and that enabled them to travel the world, which is something Mrs. Webster greatly enjoyed.

When Roy Webster died in March 1993, Mrs. Webster continued to travel and her most recent trip was to Cuba.

In February 2000, Mrs. Webster began working for California College of Podiatric Medicine as their director of financial aid. She administered financial aid programs until June 2002 when the institute underwent a change in ownership.

Mrs. Webster worked for a short time for LEW’s Consulting as their chief consultant and president until she and her son moved in 2003 to Southern California where she began at the University of La Verne as director of financial aid.

Mrs. Webster continued to work at ULV until her death early this year.

“She was remarkable and funny, a really cool lady,” Brittany Davila, a financial aid adviser at the University of La Verne, said.

Nearly everyone at the office had something good to say about Webster – that she positively influenced her coworkers with her kindness.

According to those who knew her, Mrs. Webster organized trips to watch the jazz festivals in Monterey every year for her and her friends.

“She loved to cook, and threw elaborate parties for people to eat the dishes she cooked,” University Chaplain Zandra Wagoner remembered. “She also loved driving around her big Chevy truck.”

In 2004, her son Larry Webster died due to complications from AIDS and Mrs. Webster took a break from studies she was taking, in order to mourn his passing.

In the year following her son’s death, Webster received more bad news when she was diagnosed with multiple myeloma, a cancer of the bone marrow.

She received a bone marrow transplant which appeared to treat the cancer.

She was also a champion for funding education. Speaking to the La Verne alumni magazine the Voice in 2010, she said, “It’s a matter of philosophy, and where the state is willing to invest its money … We’re in dire straits, but there are other places to cut. If we want to increase the number of taxpayers we have in this state, as opposed to those who are on the dole, I don’t see any other way than to continue funding education. If you eliminate the Cal Grant program, you won’t get it back.”

She also established an AIDS ministry at the Saint Stephen Baptist Church.

In October 2011, her cancer returned and on Jan 3, Webster died at Kaiser Hospital in Ontario.

“She really cared about us and losing her was devastating,” Gayoso said.

She is survived by a brother, a nephew and two nieces along with their families.

Her ashes were sprinkled in the Pacific Ocean.