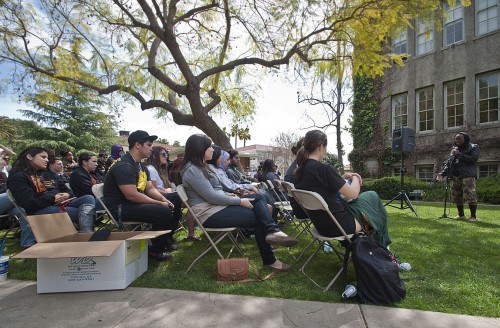 Christopher Osuala, a Cal Poly Pomona senior electrical engineering major, recites his original poem, “The Unbroken Cycle,” about racism against African Americans at the “Hoodies and Hijabs” demonstration Wednesday outside Founders Hall. The event highlighted the concern of students and faculty after the deaths of 17-year-old Trayvon Martin in Florida and Shaima Alawadi in San Diego. Leticia Arellano-Morales and Christopher Liang, both associate professors of psychology, organized the event. / photo by Katherine Careaga

Students and staff members united around The Rock outside Founders Hall on Wednesday to share testimonials of racism, hope and humanity.

The “Hoodies and Hijabs” rally, held on the 44th anniversary of Martin Luther King Jr’s assassination, came in light of the high profile cases where Trayvon Martin and Shaima Alawadi lost their lives because of racial stereotyping.

“As I heard about the two incidents that bring us here today, it’s hard to open one’s mouth without screaming,” Professor of Public Administra­tion Matthew Witt said.

Trayvon Martin was a 17-year-old Florida resident walking home from a store when he was fatally shot by community watch coordinator George Zimmerman.

Shaima Alawadi, originally from Iraq, was found by her 17-year-old daughter brutally beaten in her home in San Diego, with a note that read, “Go back to your country, you terrorist.”

Alawadi and Martin both died because they were stereotyped.

The testimonials shared were personal experiences that dealt with racism.

“It is hard for me to understand why someone would hold prejudice against a person based on their race,” sophomore psychology major Carolina Cisneros said.

Cisneros dealt with racism that was directed toward her best friend, an Arab American discriminated against following the 9/11 terrorist attacks.

Cisneros, a Latina, said she now has empathy for those treated unfairly.

“Walking down a road and being called an abomination, time and time again, is not a great feeling,” Sharma said. “Why should we stand here and say nothing?”

He mentioned how discrimination, whether through race, sexuality, religion, or even personal interests, follows individuals daily.

There is no right to say someone is worse than you, Sharma said.

Sophomore English major Breana White spoke of instances where she faced racial stereotypes within her own race.

White said that while we’re all different, we are all the same human race. She added that we should be wary of subconscious racism that occurs within our own lives.

Professor of Psychology Nadine Nakamura brought one of the event flyers she found posted. Someone had written on it, “Get over yourself and study for class instead.”

“As an educator, this horrifies me, a lot of people think talking about these issues is a waste of time or self-indulgent,” Nakamura said. “Isn’t reflecting on your experiences an important part of your education?”

Nakamura encouraged the audience to speak up not only for themselves but also for those that have been victims of stereotyping.

One of the final speakers, freshman psychology major Rachael Sullivan, told the audience to not lose hope but rather take steps toward a post-racial society.

“We cannot lose hope for our future; these tragedies are unacceptable,” Sullivan said. “Intolerance will not be tolerated.”

The group then moved to the peace pole where they were able to write down their own personal testimonies and then place into the ground surrounding the pole. 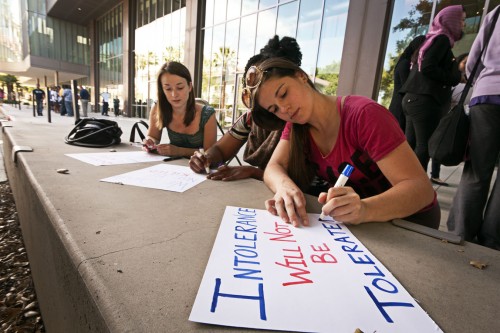 Rachael Sullivan, Sonja Assouline and Sarah Leclerc, first year clinical community psychology students, create signs to be placed in the Peace Pavilion in front of the Campus Center Wednesday March 4. Students marched from The Rock to the Campus Center after the Hoodies and Hijabs for hope and peace awareness gathering. / photo by Scott Mirimanian