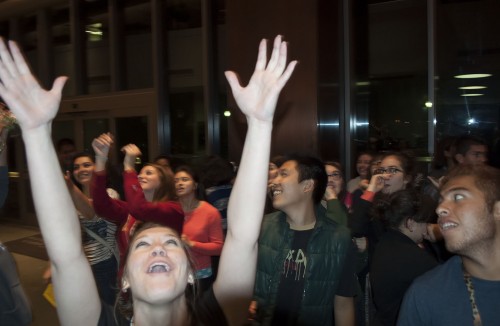 Natalie Holland, a junior public affairs major, reaches up to catch socks thrown from the second floor of the Campus Center at Destination Procrastination last week. Event sponsors CAB and ASULV gave out green socks to all those who attended. Destination Procrastination, designed to relive some pre-finals stress, was held in the Campus Center from 8 p.m. until 2 a.m. May 16. / photo by Katherine Careaga

Students could not help but procrastinate just a little Thursday night as the Campus Activities Board in collaboration with Associated Students of University of La Verne presented its annual Destination Procrastin­ation event.

“We just wanted students to get the chance to take their minds off of finals with a variety of different events and to just have fun,” sophomore legal studies major Allison Wehner, CAB spirit chairwoman, said.

The night began in the Campus Center when students found themselves faced with a large itinerary of activities from 8 p.m. to 2 a.m. that night.

There never seemed to be a dull moment at the event with types of attractions ranging from a pancake, coffee and smoothie bar to actual arcade games on the first floor of Campus Center and a live DJ taking requests on the second floor.

“I think this event was really fun, I loved the little arcade games that they had from when we were all little and now we’re all in college playing them,” sophomore psychology Malakhi Macareno said.

Many students could not wait to get their night started after warming up with a few rounds of car racing games and table hockey.

Later in the night the events carried outside with a giant Leo sized version of Monster pong where the winning participants won a variety of prizes.

A large arena of Lazer Tag sat in the south quad courtyard with dozens of students running in and out working up a sweat.

The one part of the night students could not resist were the free massages provided by the Athletic Training Student Club and members of Greek life.

“I was looking forward to getting a free massage the most. I was the definitely the first in line for that,” junior psychology major Jacklyn Duran said.

A lot of games like beach volleyball, dodgeball sock wars and a wiffle ball home run derby game were played to help some of the students relieve some stress physically while enjoying a little competition against one another.

Once students worked up an appetite they were served food all throughout the night with finger foods and fruit.

The students were not disappointed when the they were treated with the taco truck Taco Nazo and the ice cream truck S’cream Truck giving out free food.

Although the night seemed like all fun and games, the Academic Success Center provided open study hours all night long for some last minute help for finals week for any students that needed it.

The night ended with a pajama jam party, where students showed up in their craziest pajamas in hopes of winning prizes to take home with the rest of their free stuff from the night.

“This has been the best destination procrastination event since I’ve been here and I really liked it, I enjoyed myself a lot,” Duran said.

“I just hope the students were able to sit back, relax and have a lot of fun with each other and just mingle while they took their minds off of finals,” Wehner said.

Thank you, readers
Commentary: Ruining your childhood, one cartoon at a time