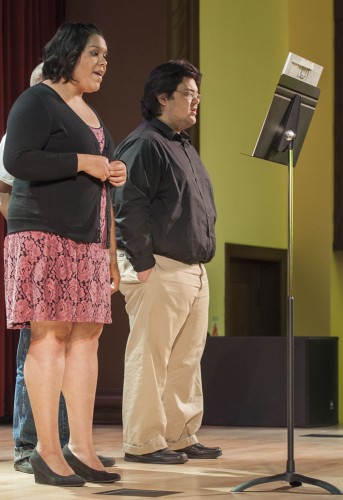 The music department presented many talented musicians, ranging from mezzo-sopranos, tenors and pianists to trumpet and flute players.

“The recital was all together very nice. I didn’t know we were so talented at La Verne,” freshman kinesiology major Nasjua Palmer said.

The recital featured students from the studios of MohWei Chen-Hribar, Karen Knecht, Eileen Holt, Jonathan Mack and Carol Stephenson with Jennifer Cruz as the accompanist.

“I’ve never attended one of these recitals before but ended up really enjoying it,” freshman criminology major Lyndsay Godwin said.

“Every performance was different in its own way and had everyone in the audience so intrigued.”

Each performance had a different feel, from energetic broadway numbers to classic opera pieces.

The audience was also treated to the sounds of freshman music major Caelin Eager on the piano and the flute trio consisting of sophomore psychology major Liz Garcia, freshman chemistry major Jacky Castaneda and sophomore English major Chandler Heath. who played “Pavanne” and “Three Nuns in the Desert.”

“Caelin was my favorite part of the show; she played with such passion and was so great to watch,” Godwin said.

Green sang two different songs to show the audience the versatility in his voice.

The first song was an opera performance followed by his rendition of “Someone to Fall Back On,” by Jason Robert Brown.

“I’ve performed in about 10 recitals since I’ve been at La Verne and tonight I felt pretty good,” Green said. “Carol has been challenging me with really difficult stuff lately so it was nice to give it a good shot.”

Some audience members were left in tears after soprano singer Nemback sang her rendition of the songs.

“Brianna is always amazing. She’s always so great in class and tonight was no different,” Green said.

The music department will host another student recital May 24 in Morgan Auditorium at 7:30 pm.