By Hunter Cole, Robert Penalber on September 14, 2012 in News 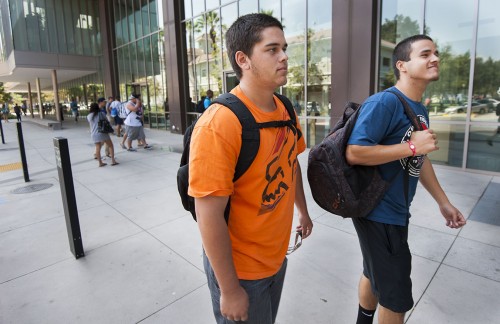 Brett Early and Alec Garcia, both freshmen who hope to be part of the baseball team, explore the campus Wednesday while walking their usual route after morning classes. This academic year is a landmark in the University of La Verne’s history with the largest number of new students admitted. The University’s on-campus undergraduate population reached nearly 2,500. More than 7,000 applications were received for the fall semester. About 650 new students were admitted. / photo by Hunter Cole

Students and staff members have differing opinions about the University’s increase in admissions and this year’s historic 650-student freshman class.

Admissions staff members explain that the situation is not as simple as comparing this year’s numbers to the enrollment figures for the 2011-2012 school year.

“While the number of applicants has increased, the percentage of those admitted has actually decreased,” Wu said.

Additionally, only 28 percent of those admitted enrolled at the University this year, Dean of Admissions Chris Krzak added.

Wu said that the process in determining the number of students admitted into the University is directed by senior management.

The provost ultimately gives an estimated number of students to admit and it is reported back to admissions, Krzak said.

“The fact that the number of (accepted) students is at an all-time high, yet the percentage (of students actually enrolled) has decreased, doesn’t fully make sense to me,” sophomore business major Brandon Klatskin said.

More students are applying for four-year universities directly out of high school or community colleges, which explains the increase in applicants, Wu said.

“There is a need for La Verne education,” Krzak said. “Students are in need of it, and more and more students want to be a part of it.”

The admissions rate has also slightly brought up the University’s prestige with an increase of .05 to the average grade point average and a 16-point increase in average SAT scores.

“In my opinion, the growth is a natural progression for the University,” Krzak said.

Krzak said everyone will need to get used to the fact that La Verne is going to keep getting bigger.

Still, students are wondering whether the campus will be able to accommodate all of its traditional-aged undergraduate students.

“It’s not so much that I want (the University) to decrease the admissions rate, but I want to make sure the rate doesn’t pass the space available here,” junior movement and sports science major Nadine Miranda said.

The record number of students is impacting everything from parking to class sizes to the use of classroom space.

But with the main campus surrounded by businesses, lot space is limited.

“The main campus is landlocked, I do not see us acquiring any new land, but what I do see is the University will begin to use its resources better and wiser,” Krzak said.

“I would hope that others would feel the same, but I do see the bigger challenge for space. There’s physically just not enough,” Wu said.

Whether the admissions rate will continue to increase or decrease remains to be seen next year.

“I imagine it will be about the same as this year,” Krzak said.