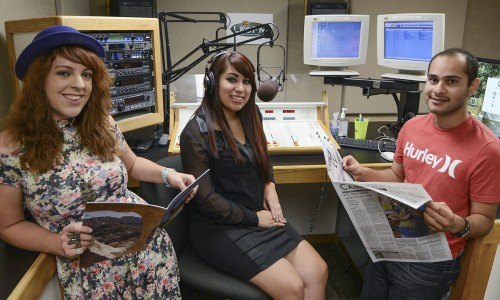 The communications department is once again in good hands with new leaders that are passionate about their media outlets and their ability to reach out to the University of La Verne community.

This fall Robert Penalber is editor in chief for the Campus Times, Katie Madden is heading the La Verne Magazine and Danielle Navarro is program director for LeoFM.

“My main focus is to keep the Campus Times’ standards up to the high standards of past editors I have worked with,” Penalber said.

This is Penalber’s fourth semester on the Campus Times and he has also served as news editor and managing editor.

“I know the amount of time that goes into the position,” he said.

As a public affairs major, Penalber said he was at first hesitant to accept the position until Associate Professor of Journalism Elizabeth Zwerling convinced him he had the qualities to make a strong editor in chief.

“When he is editing, he pulls good work out of writers,” Zwerling said.

Zwerling believes Penalber has proved himself as an editor and an excellent reporter. He is ethical and excellent at finding sources for any story, she said.

Like Penalber, Madden was overwhelmed when Professor of Journalism and La Verne Magazine Adviser George Keeler asked her to be La Verne Magazine’s new editor. She had never been on magazine staff before.

“My biggest fear was the fear of the unknown,” Madden said.

“It felt like a great honor to have been picked for something I had never been a part of yet,” she added.

Despite Madden’s inexperience on magazine, Keeler is confident of her strong leadership and journalism skills.

“I think Katie will surprise us and bring us to somewhere we’ve never been before,” Keeler said.

Madden served as arts editor for the Campus Times last semester and plans to apply the skills she learned on Campus Times to her new position.

“That was interesting as far as helping people and being on call for writers if something went wrong with their story or their source,” Madden said. “I want to form close bonds with my staff this year and help them write great stories.”

Readers of La Verne Magazine can expect social issues stories from Madden, which Keeler said he will welcome.

“I’m into activism, like feminism and LGBTQ issues, so I would love to bring in social justice aspects,” she said.

For LeoFM, senior broadcasting major Danielle Navarro hopes to transmit her passion for radio and music as program director.

“I really want us to become much more well known on campus and more prominent,” Navarro said.

She plans to take advantage of the staffs on the Campus Activities Board, fraternities and sororities to have LeoFM play more events.

Professor of Communica­tions Mike Laponis said Navarro is off to a good start as she has already begun creating promotions for the Los Angeles County Fair.

“She’s hardworking, she has good follow through,” Laponis said.

As a top 40 station, LeoFM will continue following the same format, Navarro said.

“She is up on what music is popular and what our demographic wants to hear on the radio,” Laponis said.

Navarro was a public relations major until she took a radio class and fell in love with how fast paced it was.

“I really want to work in radio and I am dedicated to it,” Navarro said.

Correction
In the original version of “New trio heading LV media outlets” in the Sept. 13 issue, the photo caption incorrectly identified the campus radio station as KULV. It is LeoFM. The Campus Times regrets the error.