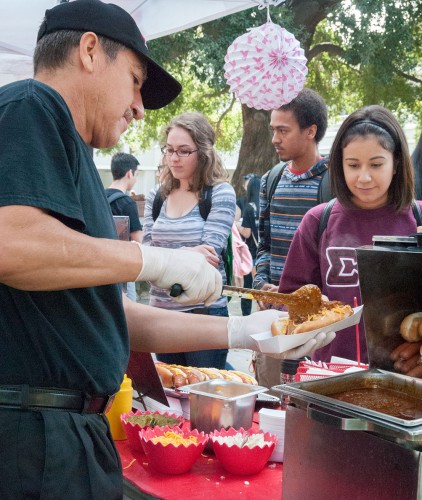 Students gathered at Sneaky Park Tuesday to show their support at Greek life’s Letters in the Park event to raise awareness for breast cancer.

The sororities and fraternities presented their letters decked out in pink supporting the cause while students enjoyed games like bra pong.

“With the rethink pink theme, it helps people to rethink what breast cancer really is about,” Keller, who organized the event, said.

“Not only that but it allows organizations to come out and encourages students to come out.”

Pink’s hot dogs were given out, adding even more pink to the event.

Also distributed to students were pink wristbands with words such as “hope,” “strength” and “faith.”

Key chains with a boxing glove and the words “fight” were also handed out to symbolize the fight against breast cancer.

“The event is not only bringing awareness for breast cancer but (it is) also raising money that will go toward breast cancer research,” Keller said.

Students played bra pong for $1 to raise funds for breast cancer research. The bras were various sizes, and the smaller the cup size the more points it was worth.

ConnecTech, a project group from the business department was also at the event selling 6-foot chargers, “cords for cancer,” for iPhones and Androids. The proceeds from their project will benefit the Breast Cancer Research Foundation.

“At this event we are not only promoting our organization but helping raise awareness for breast cancer,” Alexis Garza, junior business major, said.

“It not only brings the orgs together but students as well to bring awareness and the more awareness there is, the more it could decrease the amount affected.”

The event also featured a hula-hoop and tug-of-war contests.

“Doing the hula hoop event was fun but it also made me think about persevering,” Evelyn Bobbitt, senior biology major, said.

“When Megan told me to think about those fighting for breast cancer, I kept going, fighting for it and mentally going, trying to reach that goal of finishing strong.”