By Celine Dehban, Lauren Crumbaker on April 3, 2015 in Sports, Tennis 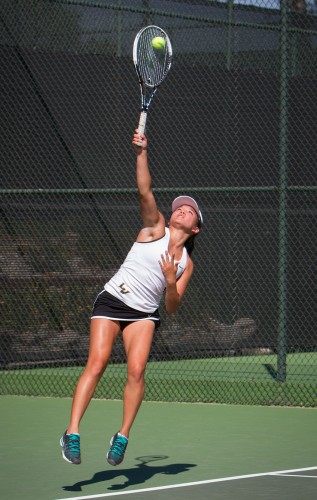 Freshman Janae Chinn and doubles partner junior Andrea Madrigal won their doubles match against Claremont-Mudd-Scripps, 8-6, Saturday at the Claremont Club. The Athenas’ crushed the Leopards in the singles matches, resulting in an overall loss for La Verne, 8-1./ photo by Celine Dehban

The women’s tennis team suffered an 8-1 loss to the Claremont-Mudd-Scripps Athenas Friday at the Claremont Club.

No. 26 La Verne fell short in both the doubles and singles matches to No. 5 CMS, who dominated the Leopards.

The Leopards drop to 8-4 overall on the season and 2-1 in the Southern California Inter­collegiate Athletic Conference.

“Everyone has played well, we just haven’t had the chance for everyone to come out at the same time,” head coach Yolanda Duron said.

The duo defeated CMS freshmen Lindsey Brown and Bria Smith, 8-6, for the only win in the doubles competition.

“It was a tough match and we fought really hard,” Torres said.

“They are a very solid team and we are really excited for the SCIAC Championship Tourna­ment, hopefully to face them again and come out with the win,” she said.

Despite coming up short, the Leopards hoped to get some wins in the singles matches.

The Athenas came out hitting, serving up losses to the Leopards, as CMS took all of the singles matches.

“I have been working on a more consistent game,” Chinn said.

Chinn was then defeated by freshman Lauren Livingston, 7-5 and 6-3.

“The past two weeks have been hard because we have been going through three matches a week during spring break and this week,” Chinn said.

Matsuda rallied long and hard, but Kuosman topped her and won, 6-1 and 6-3.

The team has been working on improving, but is getting worn out with matches back-to-back. The team has also been faced with multiple injuries and sicknesses in the past few weeks.

“We are just going to have to manage the injuries and save our bodies as much as we can to last the whole season,” Duron said.

The team is working on techniques to beat other SCIAC schools and to secure a spot in the championship tournament.

The Leopards are trying to be more aggressive in their matches.

“We are learning and figuring out new techniques as we go,” sophomore Paige Graves said. “Our coach always mentions to not wait for the other team to make mistakes, that’s why we always try new things and try to be more aggressive.”

The Leopards will return to action against the Caltech Beavers 2 p.m. Friday at the Claremont Club.