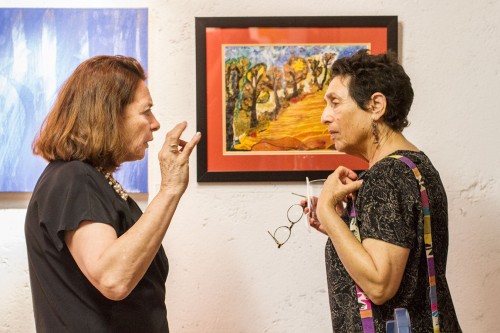 Artist Rosa Elena Osicka discusses her work with Karen Feuer-Schwager, another artist featured in the 11th annual Women International Exhibit at the Latino Art Museum in Pomona March 14. Osicka’s piece, “My Own Universe – Autumn,” is a collage made of embroidery, lace, other fabrics and oil paints. The collage features nine trees, which Osicka has rendered to represent different facets of life. / photo by Celine Dehban

The Latino Art Museum celebrated the accomplishments and creativity of women artists at the 11th annual Women International Exhibition March 14 in the Art Colony in Pomona.

More than 50 artists were featured at this year’s exhibition themed “My Own Universe,” which had artists focus on subjects and topics important to them.

The exhibition was originally restricted to women artists, but this was the first year male artists were invited to display their works at the exhibition.

“This time, we have men in the show,” said Graciela Horne Nardi, founder of the Latino Art Museum. “We made some changes and the idea is that men can celebrate women too.”

There were many pieces of different art mediums displayed, including acrylic and oil paintings, ceramic sculptures, photographs, collages and mixed media.

It depicts an orange road lined with nine trees that represent her nine essentials of an enjoyable life including family and religion.

“Life focuses on these nine things and you need to go through all of them,” Osicka said.

“It’s not that one of them is more important than another, but it’s about myself.”

Karen Feuer-Schwager is an artist who creates garment-like pieces from mixed media in her series “Garmentalization Project.” “Three Girls Dresses” are three colorful dresses made of polymer skins that are part of her project.

Feuer-Schwager said she was a tomboy as a child and never got to wear dresses outside of special occasions.

“As I get older, I’m watching children now growing up and little girls wearing the cutest little dresses,” Feuer-Schwager said. “So this is kind of my reinventing of my girlhood.”

“I do portraits, but I mostly do cityscapes,” Boxler said. “I had a show of religious paintings at a church a few weeks ago.”

Every year, the museum’s board of directors recognizes three women who have been long-time supporters and contributors as Women of the Year. One of the women chosen is a community member who shares the same passion as the museum to promote Latin artists around the world.

“(The paintings) are just colors and inspiration,” Mayoral said.

“I was inspired by the accumulation of things I see and feel – they are both similar, but different.”

The museum also released its annual yearbook, a collection of some artists featured in the exhibition.

The Women International Exhibition will be on display until Saturday.